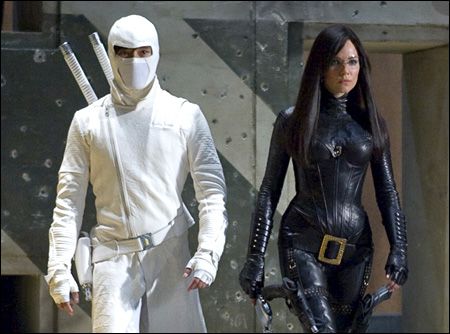 Hollywood and hallyu star power reigned in Seoul Wednesday with the arrival of the main cast and crew of "G.I. Joe: The Rise of Cobra".

A group of middle-aged Japanese women waited outside the hotel ballroom for the South Korean premiere of the action-packed film ― to catch a glimpse of "All In" star Lee Byung-hun, who makes his Tinsletown debut opposite Sienna Miller, Channing Tatum and Dennis Quaid.

Based on the G.I. Joe Real American Hero toy franchise, the film is about an elite American military squad that must stop the evil terrorist group Cobra from destroying the planet.

"Naneun baboda (I am dumb)", director Stephen Sommers proudly told reporters, and the venue broke into a rumble of laughter ― Lee had mischievously taught Sommers the wrong phrase to greet Koreans. Tatum, the heartthrob of "Step Up", said he "sniffed it out" and didn't fall for the trick.

"We had a fantastic reception at the airport yesterday It's like traveling with Elvis", said Sommers, referring to Lee and the huge crowd of fans that welcomed the stars at Gimpo Airport, Tuesday. Producer Lorenzo di Bonaventura said it was "great to have such a great Korean star" accompany his fourth trip to the country.

Tatum, 29, said his manager is Korean so he had seen Lee's performance in "A Bittersweet Life". Miller, who was seen laughing and whispering with Lee throughout the event, said she had also admired the actor in the Kim Jee-woon film. "It was one of the most astounding performances and one of the most incredible films", said the 27-year-old screen beauty, adding that her co-star is not only "incredibly talented and handsome" but also "incredibly funny, silly and kind".

Director Sommers ("The Mummy") seemed to retaliate on Lee's prank earlier. "He's a mildly attractive guy, got an OK body but his eyes, it's all in the eyes", he said about watching the actor in a Korean film whose title he couldn't recall. "No, just kidding. He's a really great looking guy with a great body", he said, saying that "his eyes are always doing something". He said that the makers had a very short pre-production period and met one other person for Lee's role of Storm Shadow "but we asked (Lee) right away".

"Storm Shadow is an iconic character and we needed somebody with the grace and the style and the physical prowess and the assuredness to make that character work", said di Bonaventura, the producer behind such blockbusters as "Transformers".

The 39-year-old returned the compliments by saying that his co-stars were "the most kind, down-to-earth people" and they became friends in no time, making his first project in the United States much easier. "He must have been intimidated but he didn't show it", said Miller.

In the film, Storm Shadow is portrayed as a Japan-trained Korean ninja who is part of terrorist group Cobra. A young Storm Shadow speaks Korean while training in Tokyo, and the director explained he meant the martial arts center to be international so Storm Shadow could well be Korean.

Miller trained six weeks for her tough evil femme fetale, the Baroness, who also happens to be an old flame of the film's hero, Duke (Tatum). Tatum, who grew up as a fan of the G.I. Joe franchise, said his "childhood didn't get let down at all, (Lee as Storm Shadow) knocked it out".