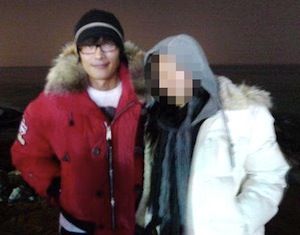 Countersuit Filed Against Kwon for Defamation; Photos Released by Ex-Girlfriend

Beleaguered star actor Lee Byung-hun, dragged into a legal battle by a Korean-Canadian gymnast over alleged sexual misconduct and gambling allegations, said the truth would be brought to light through legal procedures.

His lawyer said Monday that a complaint was filed Friday with the prosecution against the woman, identified only as Kwon, for defaming the top Korean wave, or hallyu, star with false allegations.

In a letter posted on his homepage Sunday night, Lee revealed his position regarding the scandal, which took a new twist when Kwon released some photos she had taken with Lee to the media.

The 39-year-old actor said he won't reply to the series of allegations raised by Kwon case-by-case as he believes "silence is the wisest response" to allegations distorting the truth.

However, the 22-year-old Kwon, who majored in rhythmic gymnastics at York University in Canada, is intensifying her claims against the "GI Joe" and "IRIS" star.

Claiming that she has hundreds of photographs she took with Lee, she sent e-mails containing photos to the media Sunday, saying she could release more photos to prove that they were indeed in a romantic relationship.

The e-mail was sent hours before Lee posted the letter on his homepage, with one of the photos showing them posing together at a ski resort in Gangwon Province.

"Of the numerous photos I have, I will show the ones showing that I really lived with Lee at his home and travelled with him", she said. "Lee knows that the photos he took with me cannot be erased".

Kwon said she won't give up her battle against the actor. "It's so hard and I felt so sad while sorting out the pictures of the past. But I will not back down".

"I saw Mr. Jung giving an interview during an entertainment program. Mr. Jung Jun-ho! How could you say you were feeling sorry for Mr. Lee though you never knew the relationship between the two of us?" she said.

In the letter posted on his homepage, Lee said it hurt that the relationship between the two, which once had been so warm, had turned ugly.

Lee said he posted the letter despite opposition from his agency and lawyer.

"The truth of distorted facts and other stories will be revealed one by one through legal procedures, though it will take time", Lee said. "However, it's painful that what should have remained a beautiful memory turned out badly".

Lee said he was sorry for causing his fans concern but pledged to proceed with his acting without being affected by the case.

"The work (for Iris) isn't over yet. I will give my best shot to do my job until the end. I won't budge and I hope you will not sway either", he said.

Lee and three other top hallyu stars are scheduled to hold an event to meet Japanese fans in Tokyo, Thursday.

Kwon has charged that Lee lured her into a sexual relationship under the pretense of marriage, and is seeking 100 million won ($85,000) in damages. Kwon also filed a complaint with the prosecution that Lee habitually gambled illegally while filming in the United States and Canada. Lee's agency, BH Entertainment, has denied all the allegations.

Lee is expected to be investigated by prosecutors over the gambling allegations later this week.
_________________
Actor Lee Byung-hun poses with a woman who says she was a former girlfriend in this undated photo released by the 22-year-old Korean-Canadian gymnast. / Korea Times

"Lee Byung-hun Saga Takes New Twist"
by HanCinema is licensed under a Creative Commons Attribution-Share Alike 3.0 Unported License.
Based on a work from this source