Lee Byung-hun tells 'Terminator' he too was terminator 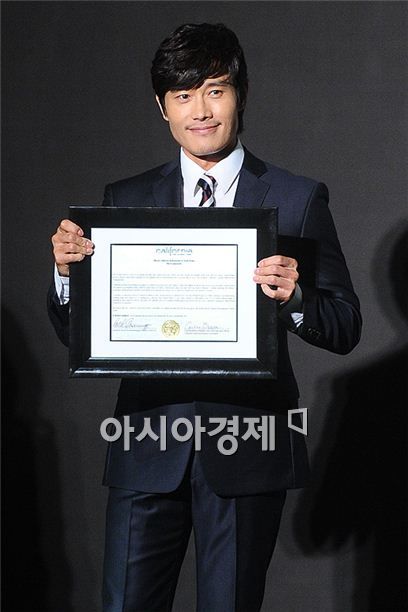 Upon his encounter with "The Terminator" star and U.S. Governor of California Arnold Schwarzenegger, top Korean actor Lee Byung-hun said he himself was nicknamed a 'terminator' during his school days#.

Speaking at a commissioning ceremony in Seoul on Wednesday where the Korean heartthrob was named a promotional ambassador for tourism to California, Lee explained that he was dubbed a 'terminator' in high school "not for having a lot of muscles but for being talented at arm wrestling".

In regards to fulfilling his duties as ambassador, Lee remarked, "I experienced the beauty of California while working on movie 'G.I.Joe' so I will take the lead in informing Korea about the world's most beautiful location California".

The actor was handed a certificate of appointment by the Governor himself, currently visiting Korea to take part in discussions on the theme of 'Globalizing Trade and Investment'.

Some 700 investors including Korean Air CEO Cho Yang-ho and Hyundai Motor Chairman Chung Mong-koo and local and foreign media outlets were also present at the event.

Lee, 40, is one of the most popular actors in Korea who last starred in Korean blockbuster TV series "IRIS" last year while also making his Hollywood debut in the action flick "G.I. Joe".

Most recently he starred in Korean thriller "I Saw the Devil" alongside actor Choi Min-sik and helmed by critically acclaimed director Kim Jee-woon which is currently playing in local theaters.

"Lee Byung-hun tells 'Terminator' he too was terminator"
by HanCinema is licensed under a Creative Commons Attribution-Share Alike 3.0 Unported License.
Based on a work from this source