Lee Byung-hun to star in online movie "The Influence" 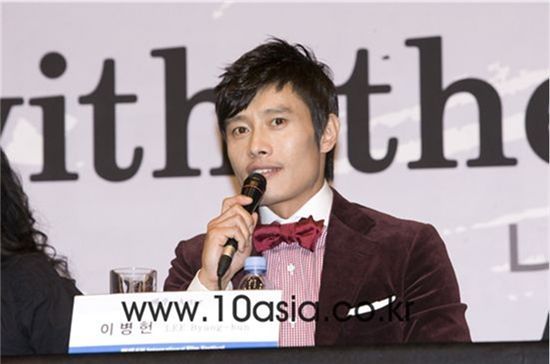 Hallyu star Lee Byung-hun is set to star in an online mystery film titled "The Influence", according to a press release by the film's producer Realize Pictures on Wednesday.

Lee, 39, will play one of the main characters who has to make a choice on his path to fulfilling a promise made many years ago in the film set for release online in early March.

Lee Jae-gyoo, who has created several hit TV series including "Damo" and "Beethoven Virus", will be making his directorial debut with "The Influence". He will team with screenwriter Hong Jin-ah of "Beethoven Virus" again for the three-part movie based on a time period covering 1907 to 2010.

Lee Byung-hun is considered one of Korea's top actors who has starred in numerous Korean dramas and films, including the recent blockbuster TV series "IRIS" for which he won the award for best actor at the 2009 KBS Acting Awards.

He also debuted in Hollywood last year with a supporting role in "G.I. Joe: The Rise of Cobra" alongside Channing Tatum and Sienna Miller and starred in action thriller "I Come with the Rain" alongside Josh Hartnett and Takuya Kimura.

"Lee Byung-hun to star in online movie "The Influence""
by HanCinema is licensed under a Creative Commons Attribution-Share Alike 3.0 Unported License.
Based on a work from this source