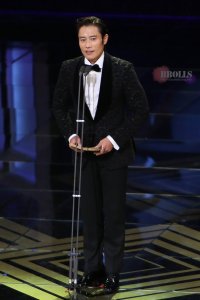 Actor Lee Byung-hun known, as Byonsama in Japan, flew to Japan on Tuesday to promote his recent film "Once in a Summer".

The Japanese press reported Wednesday that the top Korean star came to Japan along with actress Soo Ae, who played opposite his role in the film. When they arrived at Narita International Airport, they were greeted by cheers and applause by some 1,000 fans who were waiting for them from early in the morning, it added.

According to the Japanese sports newspaper Spornichi, Lee smiled and waved at the fans and expressed his gratitude by saying "Thank you, and I am pleased to be here".

The two stars will attend the film's preview on Wednesday and hold a press conference on Thursday.

"Once in a Summer" performed poorly at the Korean box office, but is expected to do well in Japan. Sold to Japan for 4 million US dollars before its release in Korea, the movie will be released across Japan on Jan. 27.