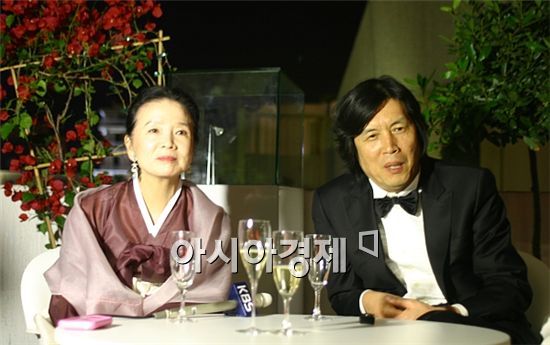 "Poetry", which stars veteran Korean actress Yoon Jung-hee, was considered one of the favorites for the Palme d'Or prize at the event but had to settle for best screenplay. The film is about an elderly woman who learns how to write her own poems while fighting Alzheimer's.

During a brief interview with Korean reporters after the awards ceremony, Lee appeared satisfied for winning best screenplay but expressed his disappointment for Yoon.

"I actually didn't expect to win Palme d'Or because it is extremely difficult to objectively judge a film", said the director. "Winning such an award is only possible when several factors come together. In fact, I was feeling burdened by people's enormous expectations".

"What I had hoped for was a best actress award and I thought that Yoon was more than worthy of winning", the director went on to say. "The audience and industry officials who had seen the film were all moved by Yoon Jung-hee's acting and supported her. I think that alone is as good as winning an award".

Last week, both Yoon and Lee had received a standing ovation for their works after the gala screening.

Another Korean pic "The Housemaid - 2010", directed by Im Sang-soo, failed to pick up a trophy but is said to have made a strong impression on movie industry executives who had seen the film at the screening.

Meanwhile, the coveted Palme d'Or was handed to "Uncle Boonmee Who Can Recall His Past Lives", directed by Apichatpong Weerasethakul who had previously won the Jury Prize for 2004 film "Tropical Malady".

"Uncle" is about a sick, middle-aged man who explores his past lives and the source of his illness as he encounters the ghost of his dead wife and a lost son who has returned in a non-human form.

"Uncle marks the first time ever for a Thail film and the first time in thirteen years for an Asian film to claim Cannes' top honor since Iran's "Taste of Cherry" and Japan's "The Eel" shared the award in 1997.

French movies looked to be a favorite among the judges, headed by eccentric U.S. filmmaker Tim Burton, as films "Of Gods And Men" and "A Screaming Man" picked up the Grand Prize of the Jury and the Jury Prize, respectively.

Spain's Javier Bardem and Italy's Elio Germano shared the best actor title for their films "Biutiful" and "Our Life", respectively, while French actress Juliette Binoche claimed her first best actress trophy at Cannes for her role in "Certified Copy".