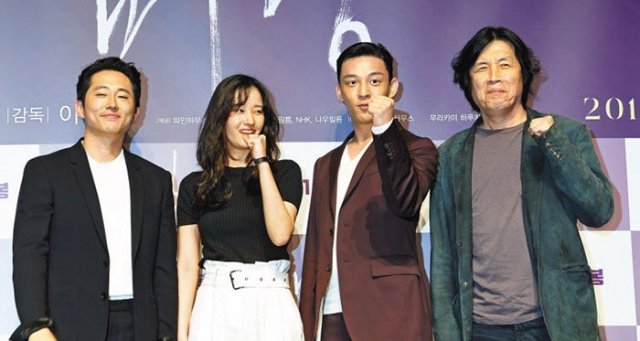 Director Lee Chang-dong (far right) poses with the cast of his film "Burning" at a press junket in Seoul on Tuesday. From left, Steven Yeun, Jun Jong-seo and Yoo Ah-in

Award-winning director Lee Chang-dong shared his feelings ahead of the release of his latest film at a press event on Monday. "Burning" is his first film in eight years since "Poetry" in 2010.

"I can't believe that it's been eight years since I made "Poetry"," Lee said. "For the first time in ages, I worked with young people and tried to tell their stories in my film. I tried to forget my own age while making the film".

"Burning" is a mystery drama based on the short story "Barn Burning" written by renowned Japanese writer Haruki Murakami.

It has been nominated in the competition section of the annual Cannes Film Festival, along with "Ash Is Purest White" by Jia Zhangke, "BlacKkKlansman" directed by Spike Lee, "Le Livre d'Image" by Jean-Luc Godard and "Shoplifters" by Koreeda Hirokazu.

Yoo Ah-in, who stars in the new film, said he has dreamed of working with Lee for some time. "It was different from any other filming experience", Yoo said. "As time went by, I really got to understand my character".

Korean-American actor Steven Yeun voiced similar sentiments. "I've been a big fan of Lee, so it was very lucky for me to work with him", Yeun said. The actor, who appeared in Bong Joon-ho's film "Okja", said he got the opportunity through Bong.

The film is set to hit the theaters here on May 17.

"Lee Chang-dong Speaks Ahead of Latest Film Release"
by HanCinema is licensed under a Creative Commons Attribution-Share Alike 3.0 Unported License.
Based on a work from this source