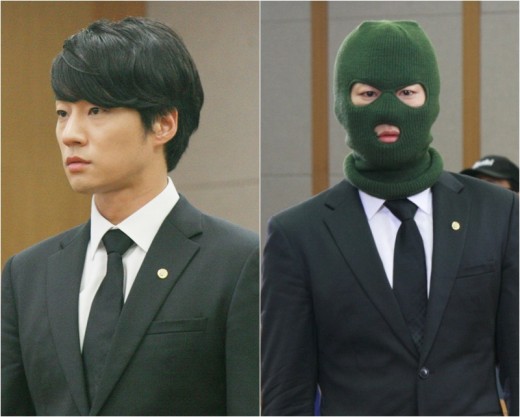 Pictures of Lee Chun-hee who has been chosen as the hero in the KBS 2TV "Drama Special - You're Amusing" were revealed, one as a neatly dressed prosecutor and the other of him standing in court with a mask on.

Taking on the role of Han Dong-gyoo, a prosecutor that has lost all of his cases so far, is wearing a mask to prove his point in a case trial.

While the subject of a 'mask' is being highly dealt with in recent dramas such as the KBS 2TV "Bridal Mask" and SBS TV "Ghost - Drama", it seems that is does so too in "Drama Special - You're Amusing" as well.

The neatly dressed Lee Chun-hee gives off a smart appeal. Attempting at this role for the first time since his debut, Lee Chun-hee rehearsed the scene several times and went through his lines to get used to the technical terms that prosecutors' used.

Those who have seen Lee Chun-hee in a mask say, "Why is he wearing a mask?", "I wonder what's happening", "Awesome! But why the mask?", "I want to see this quick!" and more.

"Lee Chun-hee wears a mask, "masks are 'it'""
by HanCinema is licensed under a Creative Commons Attribution-Share Alike 3.0 Unported License.
Based on a work from this source