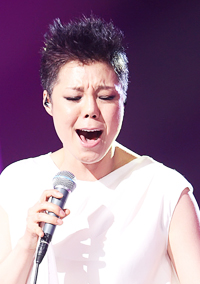 Given her relative inexperience, the decision was unexpected especially compared to the first season hosted by Lee So-ra and Yoon Do-hyun. These two singers and then contestants had hosted several gigs before, unlike Lee.

"We were impressed with her style of talking that was both comforting and effortless", said the creative director of "I'm a Singer".
"After the opening show (on Sunday when she was a temporary replacement), we asked her persistently, insisting that she take the job, and she finally accepted this morning".

Her emceeing style was widely praised, drawing comparisons to her predecessors. Comedians Park Myung-soo and Noh Hong-chul will join her as co-hosts.

"I'm A Singer" pits active veteran singers against each other in a competitive format. The show created controversy about the elimination process and criteria when it made its debut last year, but has quickly garnered high ratings.