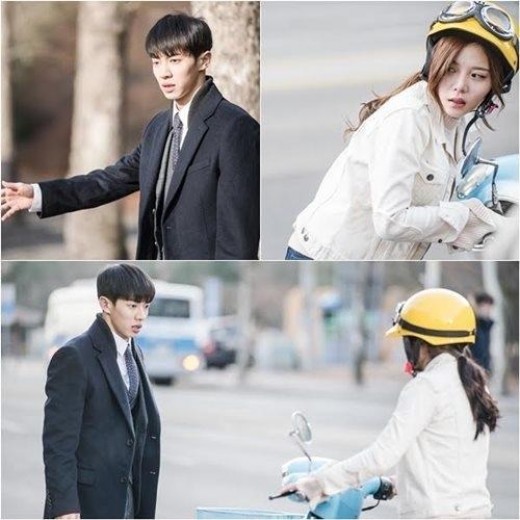 MBC has released some of the behind-the-scenes images from the first take, while they announced that the new Monday & Tuesday special drama, "Monster - 2016" began filming.

The revealed images show the first encounter between Lee Gi-kwang, who plays a second generation plutocra, and Lee Yeol-eum, a delivery person working for a fried chicken restaurant.

The first take was filmed at a place in Paju, Gyeonggi Province.

Lee Gi-kwang did not reserve any efforts when he had to fall down onto the cold concrete slabs many time to act his role with vision disability.

Lee Yeol-eum also was fully prepared to bring her character to life. She had practiced riding a scooter for her role as Cha Jeong-eun, who works as a fried chicken delivery crew, before she showed up at the filming set.

The fresh combination of the pair is anticipated to captivate the hearts of drama fans.

"Monster - 2016" is a romance drama depicting beautiful love that blossoms in the midst of the murky circumstances surrounded by disgusting bare faces of the privileged class and a revenge by man, who was forced to lose everyghing including his family and his future. The new drama is slated to begin in the end of March after "Glamorous Temptation" has finished.

"Lee Gi-kwang and Lee Yeol-eum show off fabulous chemistry in the first take of 'Monster - 2016'"
by HanCinema is licensed under a Creative Commons Attribution-Share Alike 3.0 Unported License.
Based on a work from this source