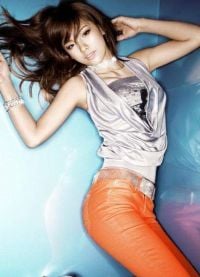 Her agency Mnet Media plans to sue the songwriter who gave the songs to Lee if the songs in question are proven to breach copyright laws.

"There were problems regarding the pieces by (the newcomer songwriter) Bahnus Vacuum", said Lee in a message posted on her fan website. "At first I was convinced that the demo tape of the songs suffered (premature) exposure. I didn't have any doubts since I received the songs through the company (Mnet Media). But after an investigation it turns out that they were not Bahnus' songs".

Seven titles on her latest recording "H-Logic" are credited to Bahnus Vacuum (real name Lee Jae-young). There has been much debate over the originality of the songs for some time now among netizens but Mnet Media previously issued a statement upholding Bahnus' claim that the demo tracks were prematurely exposed.

"It took some time to track down the original songs because they were all borrowed from foreign pieces. Two were proven to be based on other works. We contacted the original songwriter and we are discussing the matter. As much as I have caused harm, albeit unintended, I will take the responsibility", the 31-year-old singer said of the songs "Feel the Same", "How Did We Get", "I'm Back", "Memory", "Geunae" (Swing) and "Highlight".

In April netizens pointed out that Lee's "Bring It Back" resembles Canadian girl band Cookie Couture's "Boy, Bring It Back", while "Feel the Same" was similar to Canadian singer Melanie Durrant's song of the same name. "How Did We Get" was compared to "How Did We" by U.S. singer Jason Derulo, while "I'm Back" was measured against Canadian singer Lil Precious' "So Insane". "Memory"was noted for its resemblance to "The Alphabet Song" by British band Second Person.

Mnet Media said that it contacted the foreign songwriters of the songs in question via email beginning in April, and received a reply from the agencies of Cooki Couture and Second Person. The issue is currently being discussed between lawyers representing the respective artists.

Meanwhile Bahnus Vacuum was not available for comment. Mnet Media said that when talks of plagiarism first spread he claimed innocence by providing documents which later turned out to have been forged.

"Lee Hyori admits plagiarizing songs"
by HanCinema is licensed under a Creative Commons Attribution-Share Alike 3.0 Unported License.
Based on a work from this source