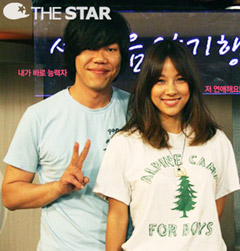 K-pop singer Lee Hyori has fallen in love with Lee Sang-soon, a guitarist who played for a modern rock band Roller Coaster. The two have been in a romantic relationship for about four months, Lee Hyori's management agency B2M Entertainment confirmed.

"They are both members of an animal rights' group and they were able to build up mutual trust based on their shared interests and values", it added. They got close to each other when they collaborated on producing a song to support abandoned animals in July, and their shared love for music and animals led them to develop feelings for each other.

Lee Sang-soon debuted with the band during its second album in 1999. He also worked on the original soundtrack of the film "Petty Romance" last year.