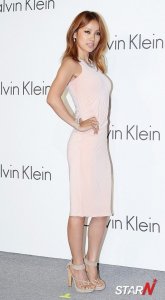 Fashion icon Lee Hyori has been making headlines in China recently for her outstanding fashion style that has gained enormous popularity among young Chinese women. Chinese women are following Lee's hairstyle, clothing, glasses, footwear and even accessories -- further evidence of the direct influence of Korean popular culture on young Chinese via the Internet.

Lee is one of the biggest hallyu stars who have gained popularity in China via the Internet. Chinese netizens can easily and swiftly search for news stories and images of hallyu stars on such major Chinese portal Web sites as Open the link and Open the link.

Lee's photo albums introduced every season have even been setting fashion trends in China. One twenty-something Chinese woman said Lee is perceived as a sexy icon in China and that Korean style has surpassed even American and Japanese styles since hallyu stars were introduced in China through TV dramas and music.

Lee's hairstyle is a major fashion item these days among Chinese women, who mostly prefer long hair. Lee's hairstyle topped the ranks of hairstyles of top Korean stars in an article that was posted on a Chinese fashion Web site recently. Chinese fashion experts say the long, black and straight hair of actress Jeon Ji-hyun is also popular, but Lee's natural-looking yet sexy layered hairstyle dyed in a fair tone has undoubtedly been leading the trend these days.