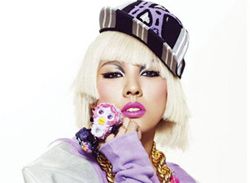 After weeks of hype and speculation, M-net Media has finally unveiled a teaser video of K-pop sensation Lee Hyori's comeback of her fourth album. Titled "H-Logic", the video surfaced on Mnet.com and Naver Music at 11 AM on March 29, 2010.

Though the teaser is short, running for a mere 30 seconds, Lee Hyori shows off her typically dynamite style.

Teaser pictures of Lee Hyori had surfaced just a day before, showing off her new platinum blonde hair, a bright yellow and black patterned outfit, and smokey eye makeup. Lee who is known as a fashion and style icon in Korea, was also seen sporting a more casual attire of trendy athletic-wear.

What's even more noteworthy was the tiger that popped up in the teaser video. According to a source from the music video production team, the tiger was an idea from the pop diva herself. Lee teamed up with music video director Cha Eun-taek for the video of her new title song off the "H-Logic" album. Cha was also the director behind some of Lee's previous works such as "Animotion", "You Go Girl".

So far, the response from the public has been positive. Netizens have been posting up comments such as "What a hit concept!", "Looks hot", "That's so Lee Hyori".

Lee Hyori's comeback has been a long time coming! It's been 22 months since her last album "It's Hyorish" in 2008. Her brand new album is expected to hit the market April 8th.