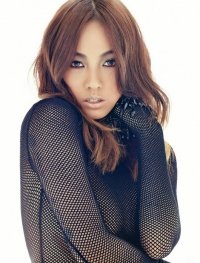 "I'll seduce Japanese fans with my sexy looks", promised Lee Hyori, revealing her strategy for cracking the Japan market. Lee was speaking at a press conference on Monday at the Hotel Okura Tokyo in Japan ahead of the launch on Fuji TV CS of her soap "If in Love... Like Them".

"There are a lot of talented female singers in Japan, but I think my bright and healthy image is my trademark", she said. "I bring spontaneity and naturalness to my performances, instead of simply following a script. Wouldn't Japanese men like it if I appeal to them with sexiness? Sexiness is my weapon".

When asked why she didn't enter the foreign market earlier, Lee said, "A great opportunity arose when I moved to a new agency. Before, it seemed like a bad idea to toil for years as an unknown overseas. It'll be easier to enter the Japanese entertainment industry once my drama is broadcast in Japan".

Lee didn't seem to mind being compared to Koda Kumi, one of Japan's top pop divas. "Being compared with Koda doesn't feel too bad", she said confidently. "I watched one of her concerts on DVD and I saw some similarities in our styles. Comparing us is a win-win situation for both of us".

Also at the press conference was Lee's co-star Lee Dong-gun and director Cha Eun-taek, and Lee discussed the rapport she built with her leading man. "Lee Dong-gun never referred to me as his elder, he called me by my name", she said. "I don't know why, but it feels fine for me for a younger guy to call me by my name, and not 'nuna' (elder sister)".

As to the future of her acting career, Lee said she needs a little time off. "I got a lot of offers for movies and TV, but I'm so exhausted after working so much this year -- I'm planning to take a break to study".