Lee Ji-ah graces cover of both Korea and China CeCi 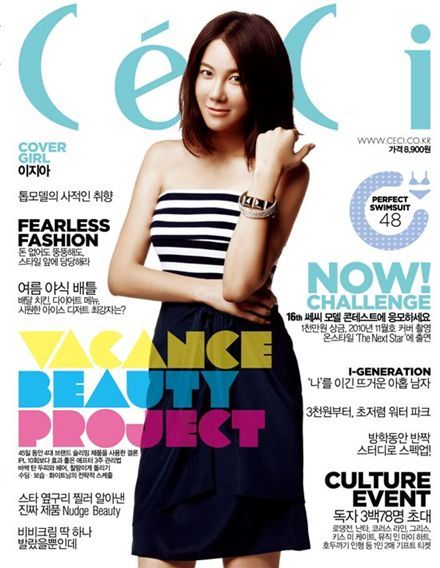 Korean actress Lee Ji-ah has simultaneously graced the cover of the July issue of a fashion magazine in Korea and China, according to a press release from KEYEAST on Thursday.

KEYEAST announced in a press release that the July issue of CeCi and CeCi China both featured Lee on the cover page of the magazine as well as a photo spread inside.

A representative who was on site of the shoot said, "It's a rare occasion that the magazine featuring the same star is sold in both Korea and China at the same time. This shows that Lee is popular in the greater China region as an rising Hallyu star".

The photo spread shows Lee in everyday settings, without being dolled up and in comfortable clothing.

The July issue with Lee on the cover, which went on sale last Sunday in Korea, has hit the stands of Beijing, Shanghai, Guangzhou and 40 other cities in China.

Lee, 29, made her debut in the 2007 historical epic "The Legend" as Suzini, the love interest of Hallyu star Bae Yong-joon. She also appeared in the big screen with "The Relation of Face, Mind and Love" alongside actor Kang Ji-hwan.

"Lee Ji-ah graces cover of both Korea and China CeCi"
by HanCinema is licensed under a Creative Commons Attribution-Share Alike 3.0 Unported License.
Based on a work from this source