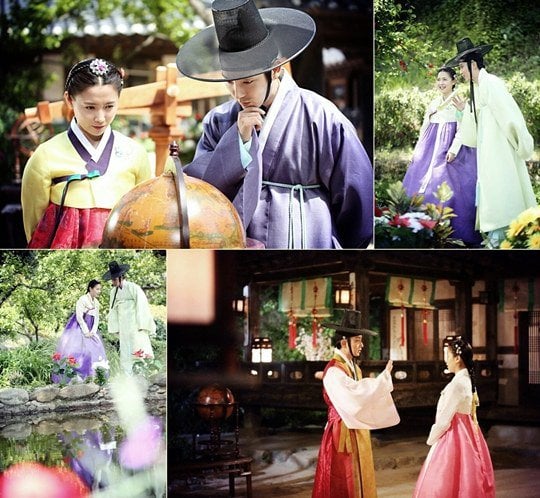 Lee Joon-gi and Nam Sang-mi are the perfect chemistry.

Stills of them were released prior to the first broadcast of the KBS 2TV drama.

Lee Joon-gi and Nam Sang-mi are expected to show a special romance in "The Joseon Shooter". Based on the time of enlightenment, which is rare for a drama, a love story between a man and a woman who both dream of a new world, is one of the highlights of "The Joseon Shooter". All grown up and matured, Lee Joon-gi and Nam Sang-mi have reunited for the first time in 7 years. Both took the time to talk about the teamwork they have.

Lee Joon-gi said, "I didn't need time to get used to my co-actress. We met 7 years ago, so we were very comfortable with each other. I was able to concentrate right away. We work really well together. We prepare for every scene together with the feeling of playing with a friend at a playground".

"Everyone is going to love and be excited about the love story between Yoon-kang and Soo-in. There is an ordeal, of course. The time of enlightenment was a time of confusion. The happiness and pain of Yoon-kang and Soo-in will be drawn dramatically".

Nam Sang-mi apparently read the script and knew right away it would be a hit. She said, "I was drawn to Yoon-kang and Soo-in. They don't get along at first, but they end up falling in love and that's so sweet. Many people might recall their first loves. However, it's so touching you might cry too. Watch as they fight through hardships and make their love happen".

Nam Sang-mi calls Lee Joon-gi 'brother' and they are really like brother and sister. "He's really good to me and this helps us create synergy for Yoon-kang and Soo-in".

Meanwhile, "The Joseon Shooter" will be released on the 25th at 10PM.

"Lee Joon-gi and Nam Sang-mi reunite in drama "The Joseon Shooter""
by HanCinema is licensed under a Creative Commons Attribution-Share Alike 3.0 Unported License.
Based on a work from this source