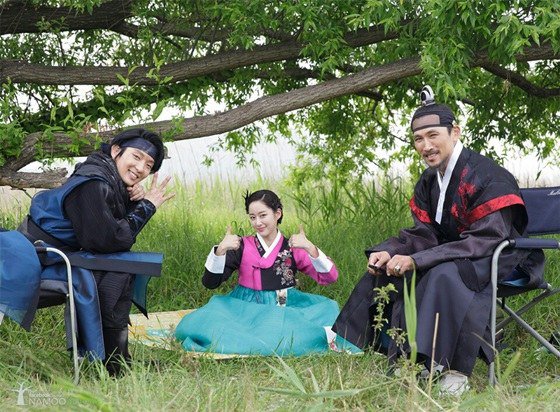 Lee Joon-gi, Jeon Hye-bin and Yoo Oh-sung were seen on the site of KBS 2TV drama "The Joseon Shooter".

A picture of them was released recently and the three casts are smiling brightly towards the camera.

Jeon Hye-bin seems more mischievous than the cold smile she's shown in the drama and Yoo Oh-sung is smiling too softly to be a rough shooter.

A staff on site says the cast are very close to each other, so the atmosphere is always friendly and fun. The staff also say as soon as the camera is turned off, they change completely. Currently, the drama is stepping deeper and deeper into conflicts.

Meanwhile, "The Joseon Shooter" is about a swordsman becomes a shooter and becomes the people's hero.

"Lee Joon-gi, Jeon Hye-bin and Yoo Oh-sung in "The Joseon Shooter""
by HanCinema is licensed under a Creative Commons Attribution-Share Alike 3.0 Unported License.
Based on a work from this source