Lee Joon-gi Reassures Fans Not To Worry About His Injury 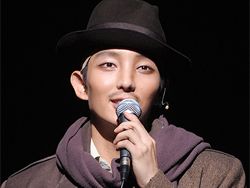 Despite a forehead injury, Lee Joon-gi attended a press conference for the musical "Voyage of Life" at the National Theatre in Jangchoong-dong of Seoul on August 24th.

Lee Joon-gi starred in the special musical production on its opening day (August 21st) with bandages wrapped around his head. However, despite his apparent injury, he gave the performance his all, receiving quite an applause at the end of the show.

After the show, the actor explained that he had incurred a significant injury during a rehearsal session for the musical. He had bumped his head onto a steel structure practicing just hours before the show. He was rushed to the Seoul National University Hospital where he had to receive 50 stitches. Although this was no minor accident, Lee insisted in performing that night because 98% of the seats were sold out. He felt it was his obligation and duty to deliver for his fans.

At the press conference, the actor apologized for causing his fans to worry and reassured them that he's taking all the necessary precautions and receiving all the necessary treatments to get better. He also expressed how it caused a lot of stress for him to decide to sit out from the musical on the second performance night (August 22nd). He did state that he'd be back performing his role from here on out and would try his best to give the best possible performance.

"Voyage of Life" is a musical about the Korean War in November-December of 1950. It was put on to commemorate the 60th anniversary since the war between the two Koreas. Despite the fact that Lee is currently serving his mandatory military sentence, he participated in this special project alongside another A-list Korean actor, Joo Jin-mo.