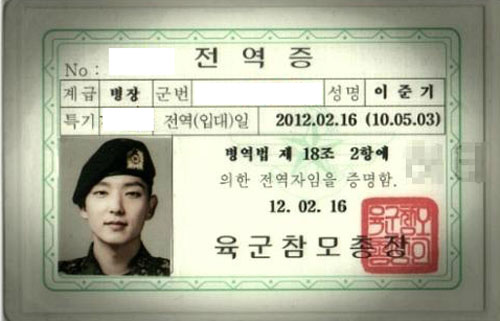 A picture of it was revealed online recently, titled "Lee Joon-gi's discharge card".

This picture shows that Lee Joon-gi has completed his duties as a soldier as per the Army Chief of Staff.

Netizens say, "His picture is so handsome!", "Lee Joon-gi is the man" and more.

Meanwhile, Lee Joon-gi was discharged on February 16th and is about to star in the new MBC drama "Arang and the Magistrate" with Shin Min-ah.

"Lee Joon-gi's discharge certificate revealed"
by HanCinema is licensed under a Creative Commons Attribution-Share Alike 3.0 Unported License.
Based on a work from this source