Lee Joon-gi to Take a Lighter Role as Reporter 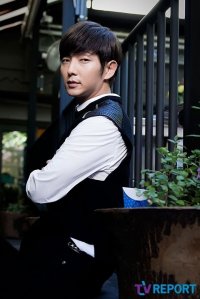 Actor Lee Joon-gi is up to the task to star in the new drama "Hero - Drama", which starts next month.

The 27-year-old has portrayed various roles in recent years, from a court jester ("The King and the Clown", 2005), national security agent ("Time Between Dog and Wolf - Drama", MBC, 2007) to a mysterious thief during the Joseon Kingdom period ("Iljimae", SBS, 2008).

"The characters I portrayed in the past were either energetic with a lot of action scenes or emotionally complicated and so I wanted to offer something lighter and fun", he said during a press conference at Melon AX Hall, northern Seoul.

"There are various episodes and I think I'll be able to show more versatility. I'm more used to physically built characters, but I'm trying hard to portray a more humorous role".

"Hero - Drama" stars Lee as aspiring journalist Jin Do-hyeok, who finds himself working for the newspaper Monday Seoul, famous for its scandalous articles and ruthless paparazzi. Dreaming to move up to the prestigious daily Daesae Ilbo, Jin struggles to get the biggest scoop of his life, and gets into a complicated relationship with a pretty yet tough female cop Ju Jae-in, played by Kim Min-jung. She was not present at the event due to an elbow injury sustained during the shooting of a drama.

Things take a turn for the worse when Monday Seoul goes out of business and a gang boss who recently got out of prison offers to start his own newspaper company.

When asked what he thought about the paparazzi after having to play one in the drama, Lee said he didn't mind them.

"I think it's cool to see Hollywood stars getting their photos taken (by the paparazzi). I am somewhat thankful that we don't have the paparazzi system, but I think it wouldn't hurt to have it", he said, laughing.

Lee went further saying that he started to read many entertainment articles through the Internet for research, and that he hoped reporters would get busy writing about him and the drama, not to mention the heroine Kim.

"I actually wanted reporters to write rumors that Kim and I were actually dating, but it's too bad she couldn't make it", he said.

"I'm sure she will return to the set as soon as she recovers. In the meantime, you can write many scandalous articles about us", he added, drawing laughter.

Although Lee started out as an actor in 2003, it took some time for him to become a household name in both Korea and Japan. His biggest hit was "The King and the Clown" and his journey as a star started from there. Starring in numerous commercials, he instantly became a hallyu star, traveling around Asia to meet fans.

The actor recently revealed his musical side by releasing a single album called "J Style" and performed at concerts in Kobe and Yokohama in July.

The news of the upcoming drama starring Lee has spread fast, and buyers from Japan, China, Taiwan, Hong Kong and Singapore have shown interest in purchasing the television series even before its actual airing here.

"Lee is especially popular in China, and we believe contracts for the show will come in continuously from neighboring countries as the time for the first episode draws near", an official from the drama's production company said.

Japan was one of the first countries to buy the soap, and Japanese fans will get to watch the drama on DATV soon.

After the press conference, Lee welcomed and shook hands with more than 200 Japanese fans who flew in from the island nation.

"Lee Joon-gi to Take a Lighter Role as Reporter"
by HanCinema is licensed under a Creative Commons Attribution-Share Alike 3.0 Unported License.
Based on a work from this source