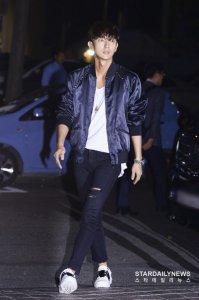 Actor Lee Joon-gi is promoting in Japan. Capturing audiences both on screen and television through the 2005 'My Girl' and movie 'The King and the Clown', he will now reach out to Japan amidst his popularity in the current drama series 'Time Between Dog and Wolf - Drama' as well as the movie 'Splendid Holiday'.

'My Girl' will be aired starting on the 6th through TV Tokyo. Lee Joon-gi will attend an event commemorating the broadcast of 'My Girl' at the Tokyo International Forum on September 13th and also an event for the opening of his official Japanese website and fan club the following day. The event on the 14th will be held with 150 invited fan members preceded by a press conference. He will also conduct personal interviews with various media personnel on the 15th.

The event on the 13th has been gathering attention for the planned 30 minute talk with Iwai Shimako, a writer and fan of Lee Joon-gi.