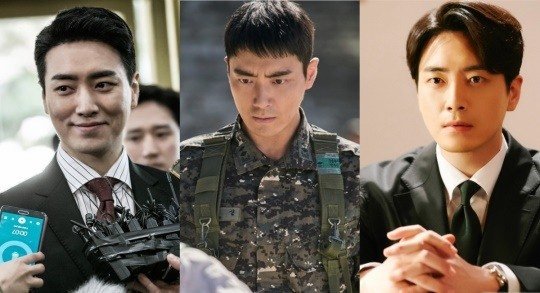 Lee Joon-hyuk played Seo Dong-jae, a corrupt prosecutor full of an inferiority complex in the tvN drama "Secret Forest", which uncovers the secrets of the prosecutors' office. Seo Dong-jae will take sides with anyone and kneel down to anyone if it means it will benefit him. Seo Dong-jae, who showed the full capacity of human nature to survive in a competitive society, was loved as a practical villain who is nasty, but also understandable and realistic. He was even called 'human bat' and 'cheeky'.

- First Lieutenant Park from "Along with the Gods"

"Along With the Gods: The Two Worlds" was a ten million hit movie where Lee Joon-hyuk played First Lieutenant Park. While Soo-hong (Kim Dong-wook) and Private Won (Do Kyung-soo) were standing guard, an accidental firearm killed Soo-hong. First Lieutenant Park is a man who covered up his death as desertion. Lee Joon-hyuk shows how a person who was close to the side of good, becomes a villain through a moment of one wrong choice. After deciding to cover up his death, Lee Joon-hyuk showed a shaky look of anxiety and approached evil to hide his guilt, creating a close sense of tension, causing the audience to tremble together and reflecting on human nature through his First Lieutenant Park, who raised his own hidden instincts of evil. Lee Joon-hyuk's performance in the villainous role was followed by a detailed portrayal of Park's psychology of going from good to evil.

Oh Yeong-seok from "Designated Survivor: 60 Days" is someone who managed to survive a terrorist organization's conspiracy to terrorize the nation, and it is Lee Joon-hyuk's best of the best yet. Lee Joon-hyuk confused viewers with his mysterious mood and expressions that made it difficult to distinguish between good and evil in the early part of the drama, as he is a character who has developed resentment against the nation through the grief of losing his comrades in the Battle of Baekryeong. As the play unfolds, Lee Joon-hyuk leads the unpredictable development that takes place when power is placed in the hands the villain, creating an aura of the gruesome foe. In front of the people, he is an honest and reliable politician, but Oh Yeong-seok's behind-the-scenes face is complete with Lee Joon-hyuk's colorful fervor, making the drama richer. In particular, the eyes alone are said to create the perfect Oh Yeong-seok himself, chilling the viewers with overwhelming charisma, a cold voice and relaxed facial expressions that put pressure on the opponent.

As such, Lee Joon-hyuk's bad guys are evolving. His passionate performance, which shows the evolution of a villain ranging from one struggling to survive to a character who becomes a villain himself through a moment of a wrong choice to the gruesome villain who seeks national terrorism, is increasing the quality of his villains.

"Lee Joon-hyuk's Evolution of Bad Guys"
by HanCinema is licensed under a Creative Commons Attribution-Share Alike 3.0 Unported License.
Based on a work from this source