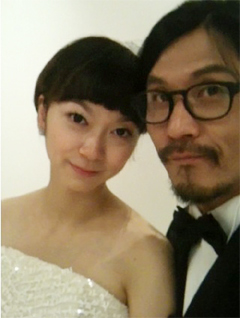 The announcement by former Seo Taiji & Boys member Lee Juno that he has wed a woman more than two decades his junior has caused quite a stir.

"I've already registered my marriage to a woman who is 23 years younger than me. We have already done the wedding photo shoot and we will have a proper ceremony soon", Lee said when shooting the "Comeback Show Top 10" on SBS Plus on Tuesday.

"We're already living together. We just haven't had the formal ceremony yet", Lee (45) added. "We've been together for a little more than a year and she is pregnant. We are expecting a baby girl next month".

When asked why he kept his relationship under wraps, he said, "I feared that my partner could get hurt [due to speculation surrounding the age gap]... but I'm sure people will understand as long as our love is genuine".

"Lee Juno Drops Bombshell About Young Bride"
by HanCinema is licensed under a Creative Commons Attribution-Share Alike 3.0 Unported License.
Based on a work from this source