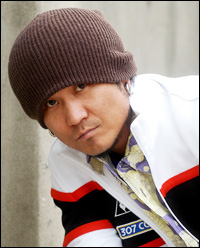 Lee Juno, 44, of the legendary band Seo Taiji and the Boys proposed to his girlfriend Park Mi-ro, 21, during the filming of the TV program "Comeback Show Top 10" at Lotte World in Jamsil, Tuesday.

Lee explained that the couple had already registered the marriage and scheduled the wedding for early 2012.

Lee has been dating Park, a college student, for over a year and the couple is expecting a baby girl in January.

He made his debut with Seo Taiji and the Boys in 1992, and is considered a cultural icon of the 1990s. After the group disbanded in 1996, Lee has been working as a producer, creating new bands like Young Turks Club.

He also has been making appearances on various TV programs such as the popular "Comeback Show Top 10".

"Lee Juno proposes on air"
by HanCinema is licensed under a Creative Commons Attribution-Share Alike 3.0 Unported License.
Based on a work from this source