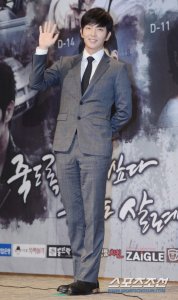 Actor Lee Joon-gi celebrated Yuletide, royal style, in Thailand. During his tour with the Korean-Thai Chamber of Commerce (KTCC), the 26-year-old took part in a large Christmas ceremony with the Thai royal family in Chiang Mai, Monday.

This is the first time a "hallyu" (Korean wave) star has visited the area, and reportedly some 5,000 people swarmed the venue to catch a glimpse of Lee lighting a Christmas tree, according to Metro. The tree-lighting event is an annual royal festivity.

The star of "The King and the Clown" was also invited to the 80th birthday celebration of Thai King Bhumibol Adulyadej, Wednesday, a first for a foreign celebrity.

Lee had filmed part of his latest TV series "Time Between Dog and Wolf - Drama" in Thailand, and has a large fan base there. During the shooting, he took part in a charity event where he auctioned off some of his personal belongings. The occasion had attracted some 5,000 fans and over 100 local press members, demonstrating his immense popularity in the area.

"Lee Lights Christmas Tree in Thailand"
by HanCinema is licensed under a Creative Commons Attribution-Share Alike 3.0 Unported License.
Based on a work from this source