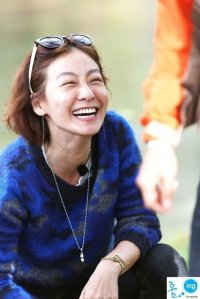 "Acting has produced the biggest energy and the greatest pain in my life. I can't promise you that I'm going to be an actress for the rest of my life. When I fall out of love with acting, I'll quit immediately. But I'm still in love". So says Lee Mi-yeon, who will return to TV screen, with a new SBS soap opera fittingly called "Crazy for Love". It starts airing on Feb 3, six years after she starred in "The Last Empress" in 2001.

Lee isn't interested in being in dramas all the time, but she has remained in the public consciousness due to her frequent appearances in commercials. "It is dangerous for an actor to feature in too many TV commercials", she admits, but adds, "People seem to have been looking out for me even during my break because of my healthy image".

In the drama, her character falls in love with the man who killed her fiancé in a car accident just a day before her wedding. Could that happen in the real world? "Well, love isn't rational. I don't think such things are impossible", she says. "Anyway, I still think nothing is more difficult than love".

Yoon Kye-sang (29), the ex-singer who recently finished his military service, stars opposite Lee. "It's more difficult to partner with Yun than with more experienced actors such as Han Suk-kyu or Park Shin-yang. I have to think more this time", she says.

Lee, who became a celebrity overnight with the success of her movie "Happiness Does Not Come In Grades" in 1989, said "I still feel sorry that I started my career when I was completely unprepared". Lee won lots of awards but then went through a slump in the early 1990s. "After a three-year break, I picked out a movie based on a novel by the famous writer Gong Ji-young and made a fresh start. I think it was at that time that my performance improved. I received a lot of praise", she says. "In "No. 3" (1997) and 'Whispering Corridors' (1998), people thought I was in a supporting role, but I felt I played the lead. I still can't forget how hard it was when I did interviews with young girls eight times a day for 'Whispering Corridors'".

With the dawning of a new century, she landed various movie awards with 'Pisces' and 'Addicted'. She now feels her name is too big. Asked if the popularity of her movies failed to her own, she asks, "Is it that important to appear in an instant hit? I don't feel I picked the wrong movies. The reason I appear in movie isn't because it garners 5 million or 10 million viewers but because of my love for the cinema".

Asked about rumors that she berates her younger colleagues if they don't give her enough respect, she says, "People who really know me say I'm really a gentle woman. But since an actor called me the female Choi Min-soo (after the notoriously blunt actor), things have got quite nasty. I've never scolded young actors. If I were really like Choi Min-soo, going my own way without minding how others view me, life would be much easier". She rates herself as "putting too much trust in others, even when deceived". "But how can you act when you don't trust other people?" she asks.