Lee Min-ho: 'I Want My Next Role to be Cheerful and Fun' 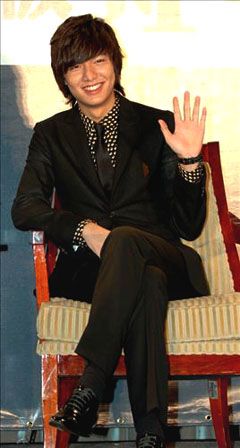 "I want to play a macho guy and try my skills at melodrama as well. I want to try so many things. But since I'm still very young, the best role for me would be a cheerful one", said actor Lee Min-ho, who rose to stardom for his role in "Boys over Flowers", at a news conference on December 15 in Taiwan. The news conference was held prior to Lee's fan meeting at the National Taiwan University.

The actor said he felt significant pressure with regard to his next role because his previous role was very popular. "Boys over Flowers", which ended in March, recorded viewer ratings of nearly 35 percent. Lee said choosing the right role was his priority and dilemma at this point, saying, "I'm feeling pressure because everyone around me keeps asking me about my next production. I want to receive recognition for my acting skills and I want my next drama to record high viewer ratings while also receiving credit for its high quality. I hope at least one of these aspects will be realized".

Lee says he wants to receive the Best New Actor award from KBS this year. He will appear in a new TV drama early next year after choosing a new role from among three roles that he has been offered.

Lee said he had been watching the TV drama "IRIS" lately and that he would like to appear in "Iris 2" if he were offered a part. He said, "I admire Lee Byung-hun for his excellent acting talent. I envy him. A candy kiss? Hmm, I haven't thought about that".

Lee had to postpone choosing his next role because of a leg injury that he received in a car accident. He said, "The surgery is done. My leg is still in bad condition. When it rains, my joints ache a lot. I head that once your cartilage is damaged, it'll never recover again. But I think I can still run in a marathon, but I'm not sure if I can finish it".

Whenever he has free time, Lee learns English and Japanese and enjoys shopping with his production crew. He also likes to ski with actor Kim Beom and Jung Il-woo. Lee said, "I feel the need to learn foreign languages because sometimes I hold fan meetings overseas. My foreign fans can't understand my jokes immediately. That's why I'm learning English and Japanese. I'm learning English from my sister, who majored in English. My skills are still similar to those of a 3-year old".