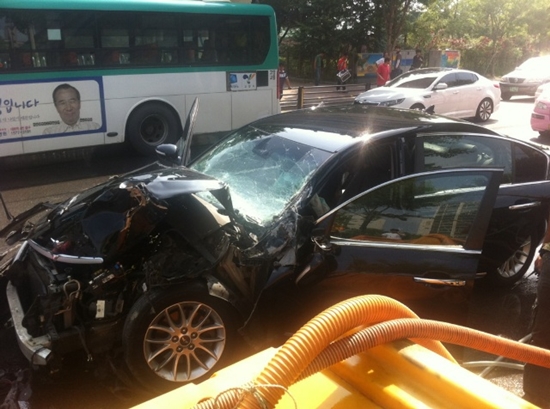 Actor Lee Min-ho's site of accident has been revealed.

Lee Min-ho's side revealed through a report on the 13th of June, "At around 3:30 PM on the 13th of June, a car was crashed at the site of shooting "City Hunter" in Kyeonggi-do Ilsan, near the Lake Park. Air bags burst and the front part of the car is damaged terribly but Lee Min-ho doesn't seem to have any big external injuries".

Then a picture of the car Lee Min-ho was in was shown. The front part of the car is greatly damaged and it seems like it could've been a nightmare.

"Lee Min-ho was taken to a nearby hospital for examination and is waiting for results. All the shooting has been stopped and will continue depending on his progress". The staff that was in the car with him in the back seat is also at the hospital.

According to CP Kim Yeong-seob from "City Hunter", there was another staff that was in the accident. "The resuming of the shoot will have to wait". "City Hunter rated 14.2% previously on the 6th and is gaining more and more popularity".

"Lee Min-ho in car accident but not greatly hurt, car destroyed"
by HanCinema is licensed under a Creative Commons Attribution-Share Alike 3.0 Unported License.
Based on a work from this source