Lee Min-ho, "My target is to expand the number of male fans" 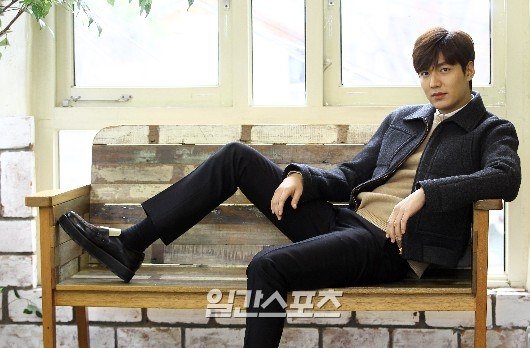 Actor Lee Min-ho is a 'man'. His trademark was a soft and attractive as he played rich young men in "Boys over Flowers" and "The Heirs". His characters, tall height of 186 centimeters, handsome features and sophistication earned him the title, "Hallyu Prince".

Lee Min-ho is reborn in "Gangnam Blues" which is the struggle of passion, loyalty and betrayal between two men in the time of the Gangnam development in the 1970s. Lee Min-ho takes on the role of Kim Jong-dae, a junk-dealer who throws himself in the world of gangster war for the right of Gangnam development. The way he uses violence to get what he wants shows that he is a real man. We interviewed the actor recently and he repeated the words 'change' and 'challenge' several times.

Your first movie is adult rated.

"I chose something meaningful to me and it turned out to be adult rated. I have been offered scenarios for movies even when I was in drama, but I kept pushing them back, thinking I'll do them when I am at an age where I can be responsible for them. I also wanted to lead star in a movie that had a message. I am in my late 20s now and I figured Yoo Ha's movie would generate a good message".

Didn't you have trouble with all that action?

"I wanted to prepare for action by attending classes after "The Heirs" but the busy overseas schedule didn't allow that. My action teacher always came along to my trips. I got lessons after work at the hotel and sometimes even rented out gyms to practice in".

The highlight of the movie was the mud fight. It looked like a lot of work.

"Actually, I don't know what's tough or not because it's my first action movie. The director usually pushes the cast to the extreme and this scene took about a week. Stuntmen who have been on the job for several years also claimed it was one of their toughest weeks".

You appear in raggedy clothes as a junk-dealer.

"I worried that the audience might not relate. I made sure my get-up wasn't too funny but sincere enough. As an audience, I might not be able to see if that's a junk-dealer or not but the fact that Lee Min-ho did something different is what I think should be the point here".

There seems to have been an increase in male fans.

"That's my target. I don't have many male fans. The dramas I've done so far are not really for guys. I think most men would enjoy "Gangnam Blues".

What suits you better, drama or movies?

"I think 90% of actors would say movies. It has more leisure. I also liked the fact that I had a lot of preparation time after doing so many dramas. I don't think I should let go of dramas though. We are currently living in the Golden Age of Korean drama and being one of the faces that represent it, I have to work harder".

You are currently in the middle of a boom in China and Southeast Asia. Why do you think that's so?

"I shot a commercial in Southeast Asia once and looking back at it, I looked like a local. If I do something in China, I look Chinese. I look different in different countries".

What Jong-dae wants the most is 'land'. What does actor Lee Min-ho want?

"I want my first movie to be a hit. I have given up want for materialistic things a long time ago. Getting someone's trust is more important now. Communication is most important between people of all genders. I didn't know how to say "Thank You" or "I love you" to my fans. But ever since I put emphasis on 'communication', I say it to my fans a lot more now".

"Lee Min-ho, "My target is to expand the number of male fans""
by HanCinema is licensed under a Creative Commons Attribution-Share Alike 3.0 Unported License.
Based on a work from this source