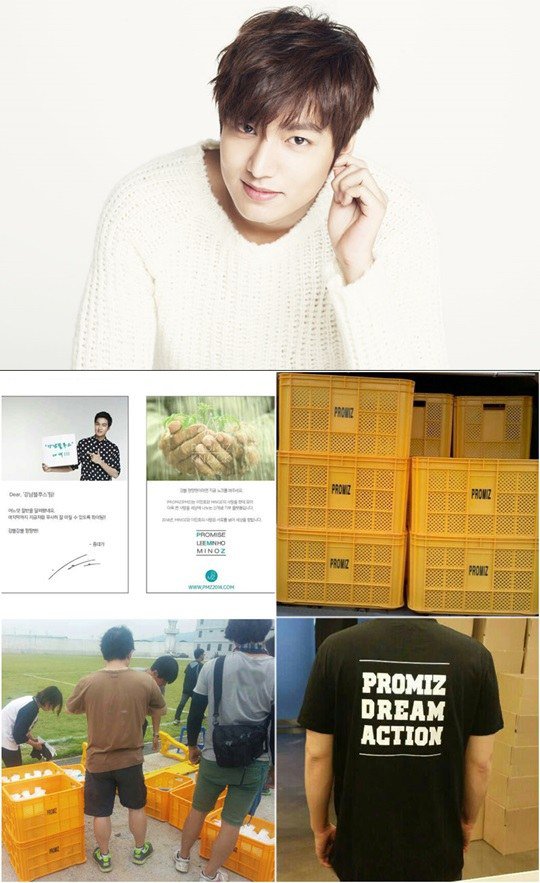 Lee Min-ho gave out gifts to the filming crew for his birthday.

Currently filming the movie "Gangnam Blues" in Soonchun and Gokseong, Lee Min-ho celebrated his birthday on the 22nd. He prepared T-shirts and towels for all the staff on site. The T-shirts have the logo 'PROMIZ' on them and they were exclusively designed by him.

Lee Min-ho also wrote cards along with the present. There is a picture of Lee Min-ho holding a picket saying "Gangnam Blues Fighting" and it says, "We have come halfway. I hope we can finish this safely". He added a cute nickname for his character in the movie as well.

He delivered his appreciation for the staff and everyone was touched at his thoughtfulness.

Lee Min-ho said, "It's tradition to receive presents on someone's birthday but after I started PROMIZ, I was encouraged by my fans to give out presents this year instead. It feels as good as receiving presents.

PROMIZ is a collocation of 'promise', 'Lee Min-ho' and his fan club 'MINOZ'. It means 'the fans and Lee Min-ho get together to share bigger love'. It was born after a long time of preparation and thought.

PROMIZ is going to act on different donation themes every year and this year's theme is 'water' under the idea that water changed many things.

Meanwhile, "Gangnam Blues" directed by Yoo Ha is aimed for released at the end of the year.

"Lee Min-ho prepares gifts for his birthday"
by HanCinema is licensed under a Creative Commons Attribution-Share Alike 3.0 Unported License.
Based on a work from this source