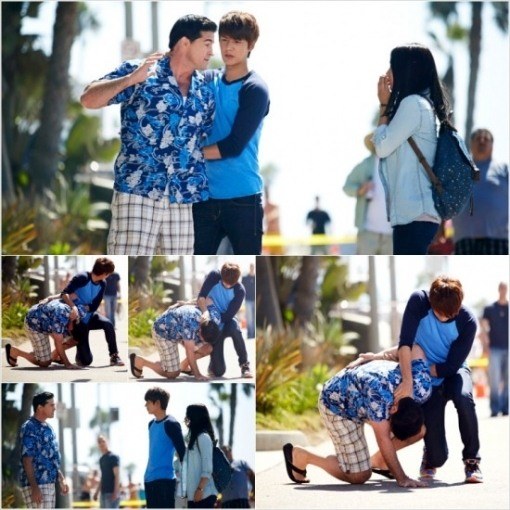 "The Heirs" Lee Min-ho filmed an action scene on the beaches of LA.

He takes on the role of Kim Tan who has everything but even the ones he doesn't need to have like pain, in the upcoming SBS drama "The Heirs".

Lee Min-ho is in a physical confrontation with a big-figured white male in the pictures.

This scene was taken at Huntington Beach in LA on the 16th last month. Lee Min-ho went through his routine with the foreigner before the camera rolled in.

The action scene was completed at once without an NG. Apparently, Lee Min-ho's outstanding reflexes and athletic ability helped him make it look as natural as possible.

He attracted the attention of other people around the area and they applauded for him.

Meanwhile, "The Heirs" is a romantic comedy about the love a friendship of wealthy high school students and a girl who has nothing but poverty to inherit.

"Lee Min-ho's action scene in LA"
by HanCinema is licensed under a Creative Commons Attribution-Share Alike 3.0 Unported License.
Based on a work from this source