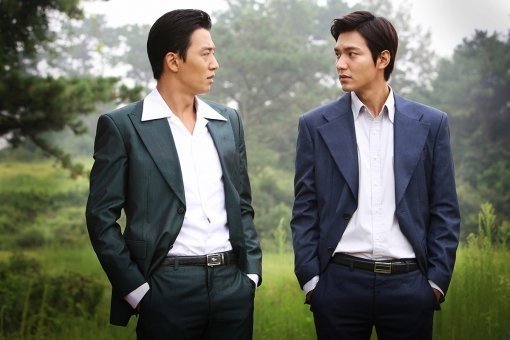 "Gangnam Blues" is being released on the 21st of January.

The stills show Lee Min-ho and Kim Rae-won's two-shot. This their first time co-acting and they play Jong-dae and Yong-gi, orphans who are closer than any other brothers.

Lee Min-ho had mentioned that he wanted to work with Kim Rae-won even before the casting started. He said, "The first movie site I went to was "My Little Bride" when I was 20 and Kim Rae-won is someone I just looked up to.

Kim Rae-won and Lee Min-ho together create synergy. Not only do they work well together, but their good looks and height make them look perfect in anything. Standing together, they draw all the attention of the staff.

Director Yoo Ha said, "They all look like models in anything so I had to make it look more out-of-date".

Yoo Ha who directed "Once Upon A Time In Highschool" and "A Dirty Carnival" is coming out with his third action movie "Gangnam Blues" which is about the desire, loyalty and betrayal of two men when Kangnam was just started to be developed.

"Lee Min-ho's "Gangnam Blues" to compete with Ha Jeong-woo's "Chronicle of a Blood Merchant""
by HanCinema is licensed under a Creative Commons Attribution-Share Alike 3.0 Unported License.
Based on a work from this source