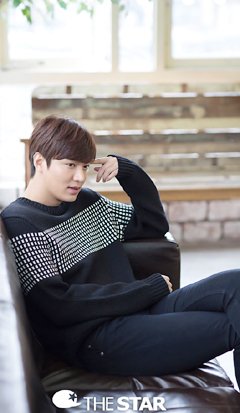 Herds of young moviegoers are rushing to the theaters to see heartthrob Lee Min-ho who appears in the gangster film, "Gangnam Blues".

While Lee became popular after a series of hit TV shows, he was hardly seen on the silver screen after he played a small part in a comedy film in 2008.

Lee owes his popularity to "nice-guy" roles, but this time he challenged himself with the part of a tough guy who gets caught up in organized crime.

"I wanted to do a film in my late twenties, and I think it was a good decision to wait until I met this film", Lee said. "I didn't feel I was forcing myself to fit certain characters but I wanted to spend time finding suitable roles that I naturally agree with. In doing so, I got a chance to star in the film, and I was personally satisfied with it".

The film portrays poverty and sufferings in the 1970s when the modernization drive began. "I'm so thankful that I was not born in the hard times of the past. It is true that modern life has become tough for a lot of young people in their twenties right now, but there are still more opportunities than in the 1970s", he said. "I hope moviegoers realize how lucky they are and live their life more fully after watching the film".

The film is set in the 1970s, when a real estate development boom swept across Gangnam and depicts the collusion between local politicians and gangsters at the time.

"Lee Min-ho Takes on Tough Role in Latest Film"
by HanCinema is licensed under a Creative Commons Attribution-Share Alike 3.0 Unported License.
Based on a work from this source