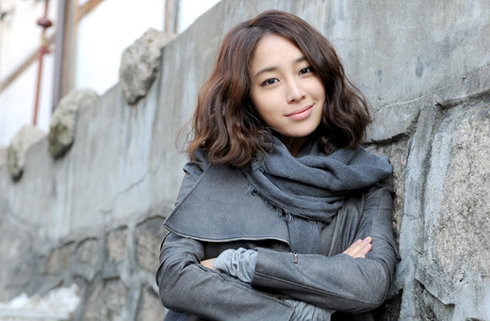 In her latest film "Wonderful Radio", which will be released at local theaters on Jan. 5, Lee Min-jung shows greater depth as an actress and proves she's more than just another pretty face with a million-dollar smile -- even if the material seems familiar.

With strong echoes of "Radio Star", featuring Park Joong-hoon, Lee's new vehicle revolves around a radio show host who was once a leader of a popular girl band but is now struggling to boost listener ratings.

Notably, the actress known for her haunting good looks shows flashes of aggression while also coming across as cute and considerate. She said she drew inspiration from her own childhood experience as an avid fan of radio shows, when she would laugh and cry at hearing peoples' stories broadcast over the airwaves.

Previously, Lee restricted herself to more two-dimensional, happy-go-lucky characters, which won over viewers but failed to fully test her skills as a thespian, as was the case with the movie "Cyrano Agency" and the hit TV drama "Boys over Flowers". The soap propelled her to fame in 2009.

However, the latest twist to her career left her questioning herself. She told the Chosun Ilbo during Monday's interview that she was tossing and turning at night in between filming, wondering if she could pull it off. She later found her groove, but is unsure how fans will react to her latest performance.

"If my latest film performs worse than I expect at the box office, I'll probably feel hurt", she said. "But I'll soon put things behind me and move on".

Lee is a late starter in the world of Korean entertainment. Whereas most starlets launch their careers as teenagers, she debuted at 25 after graduating from Sungkyunkwan University.

She said that working in show business has given her the opportunity to see herself more objectively, and that she has always viewed acting as a serious profession, while being careful not to get getting carried away by her own celebrity.

"But it would be a lie to say I wasn't anxious until people began to recognize me", she said. "I became restless wondering if my best was really good enough, even though I'm a pretty positive person".

"In the past, if I made mistakes in terms of my acting or career choices, I would feel hurt and embarrassed. But now I only think about getting back on my feet again as soon as possible".

"Lee Min-jung Expands Her Acting Repertoire with 'Wonderful Radio'"
by HanCinema is licensed under a Creative Commons Attribution-Share Alike 3.0 Unported License.
Based on a work from this source