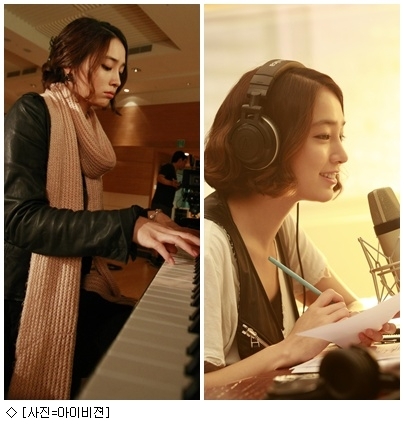 Lee Min-jung from the movie "Wonderful Radio", which is in second place at the box office, revealed a behind-the-scenes story.

Lee Min-jung draws all attention on herself in the movie with her comical ad-libs, dancing, singing and playing the guitar. The scene where DJ Jin-ah plays the piano was made on the spot. Lee Min-jung started playing the piano without any sheet music and director Kwon Chil-in made this scene on the fly after hearing her.

She didn't stop here though, and later personally made the opening manuscript like a real radio DJ. Kwon suggested that she write "an opening comment which sounds like it came from DJ Jin-ah's heart" and Lee Min-jung agreed with him saying, "Writing it in my own helped me go deeper into the character and I thought it would be more touching if I wrote a true story of my own".

Lee Min-jung used her free time to write the opening comments and said, "I wrote and rewrote my draft four or five times".

"Lee Min-jung sings, dances, performs and writes"
by HanCinema is licensed under a Creative Commons Attribution-Share Alike 3.0 Unported License.
Based on a work from this source