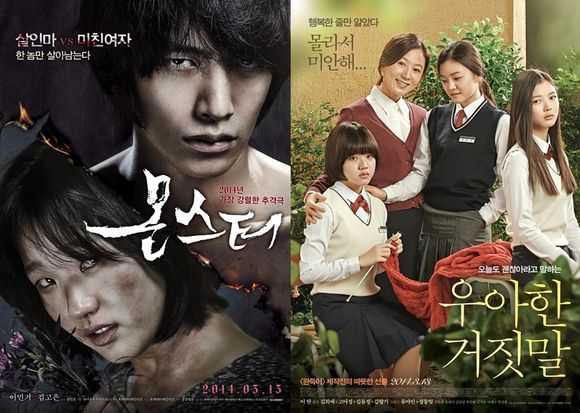 Actor Lee Min-ki and actress Kim Hee-ae have managed to keep up the head of Korean movies, but until when?

According to the Korean Film Council, "Monster - Movie" and "Thread of Lies" have an accumulated number of 68,734 and 69,843 audiences, coming in first and second in the Box Office.

The Hollywood movie "300: Revival of the Empire" had been in the lead all along

"Noah" featuring Russel Crowe is being released on the 20th this month and Marvel's "Captain America: Winter Soldier" is also coming along on the 26th.

Will "Monster - Movie" and "Thread of Lies" manage to keep their leads?

Meanwhile, "Monster - Movie" is about a woman who faces the man who kills her sister and is directed by Hwang In-ho from "Spellbound".

"Thread of Lies" is about a mother and daughter who look for the truth about the death of a sibling.

"Lee Min-ki and Kim Hee-ae holds Korean movies up high"
by HanCinema is licensed under a Creative Commons Attribution-Share Alike 3.0 Unported License.
Based on a work from this source