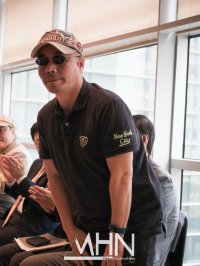 "M" started filming last year November. Gang Dong-won plays a famous novelist who is struggling with his latest work. Also, he's experiencing ambiguous moments where reality and dream become indistinctive. He has a kind and charming girlfriend, a role by actress Gong Hyo-jin. However, one time he meets another woman. He doesn't recognize her at first as his first love Mi-mi (LEE Yoon-hee), who passed away a long time ago.

Director LEE said the film will be a dark labyrinth of dream and reality, but that the first love between GANG Dong-won's and LEE Youn-hee's characters will be the heart of the film. In order to create the right feeling he will avoid fantasy created by Computer Graphics. Instead he favors to capture the fantasy elements through lighting and emotions.