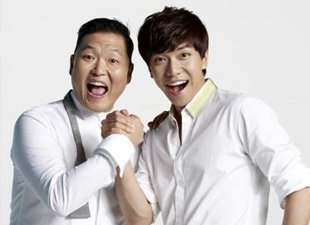 Triple threat entertainer Lee Seung-gi and the now world phenomenon PSY were named the hottest endorsement models in the biz for the past month of November. The two achieved the same feat in October as well.

According to a poll conducted by CM Value of the Korea Advertisers Association, the two stars were #1 and #2, respectively, in terms of the most popular commercial faces.

As if Lee and PSY didn't draw in enough sales on their own, the two saw a synergy effect for their refrigerator commercial. The refrigerator, produced by Samsung, was ranked at the top, above other ads.