Lee Si-young sticks old pictures of herself on her script 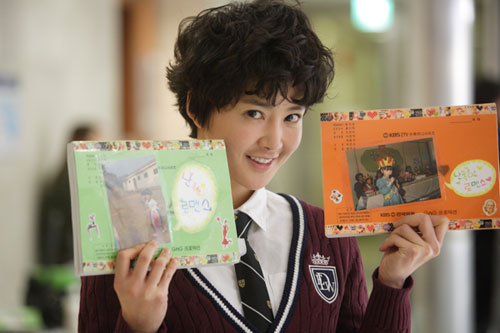 Lee Si-young, appearing in the upcoming KBS 2TV drama "Wild Romance", is showing affection for the drama by sticking pictures of her younger self on the script.

According to the production on December 29th, she takes on the role of Yoon Eun-jae, a former judo athlete.

In the pictures, Lee Si-young had short hair and is wearing shorts, running around like a mischievous girl. There is also a picture of her singing at a school concert.

Lee Si-young said, "Yoo Eun-jae is just like me when I was younger. So I stuck these pictures to help me concentrate more on my character".

"Wild Romance" is a romantic comedy about a woman who has to bodyguard a baseball player whom she would love to beat up at any chance.

"Lee Si-young sticks old pictures of herself on her script"
by HanCinema is licensed under a Creative Commons Attribution-Share Alike 3.0 Unported License.
Based on a work from this source