Lee Si-young to play tomboy who falls in love 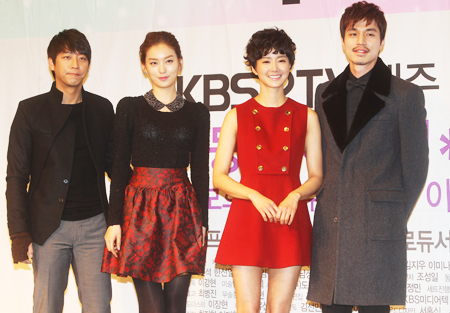 The cast of "Wild Romance" pose at the press conference held in Guro, Seoul, Monday. Lee Si-young, third from left, plays a tomboy body guard who falls in love with a baseball star played by Lee Dong-wook, right. / Yonhap

"Wild Romance", a new comic KBS drama, offers a fresh type of romantic pairing _ a scandalous baseball player and his female bodyguard. Yet, even a quick look at the characters reveals that it is too similar to "Coffee Prince", a hit drama from 2007.

Yu Eun-jae, played by actress Lee Si-young, is a zealous fan of Blue Seagulls, a baseball team, and despises Park Mu-yeol played by actor Lee Dong-wook, the short stop of the rival team, Red Dreamers. Yu gets hired as Park's body guard to silence a drunken fight between the two that was filmed and became viral online, causing rumors. Claiming that the fight was an exercise in self-defense, their love-hate relationship blossoms.

A judo champion with short hair and a preference for menswear, Yu greatly resembles Go Eun-chan, the heroine of "Coffee Prince" played by actress Yoon Eun-hye. In the romantic drama about a newly opened coffee shop, Go, a tomboy, pretends to be a guy to work at the cafe and falls in love with her rich playboy boss, Choi Han-gyeol played by actor Gong Yoo. The drama was wildly successful, putting both Yoon and Gong on the roadmap to mainstream stardom.

Clearly, Lee's character is eyeing the indescribable popularity of girls-in-disguise concept in dramas that started with "Coffee Prince". Actress Moon Geung-yeong played a gifted artist, who lived as a man to be a state-designated painter in the drama, "Painter of the Wind" (2008). Likewise, Kim Yoon-hee, played by Park Min-young, disguises herself as a man to become a court official in "Sungkyungkwan Scandal" (2010).

These non-traditional roles have vaulted the actresses to stardom. Though Yu is not in disguise, her character looks and speaks like Go, yet for creating another sensation like Go, Yu's role conventional, a female helpless in front of love.

"Yu has no dream; she just works to make ends meet and watching baseball is the sole joy in her life, and then she gets to know Park, and starts to support him though she used to hate him. Eventually, she falls for him and love becomes her dream", explained Lee at a press conference held in Guro, Seoul on Monday.

Not surprisingly, her "womanhood" is challenged by Gang Jong-hui, a girlish character played by Jessica from K-pop group Girls' Generation, who also pursues Park. 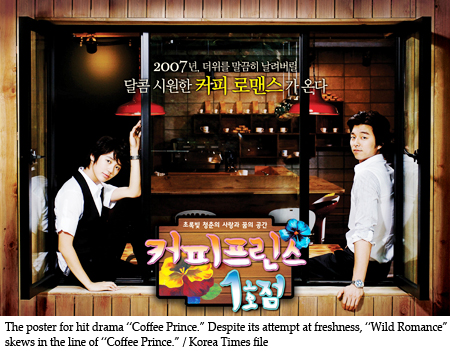 Such rivalry was depicted in "Coffee Prince" as well as Go struggles against Han Yu-ju, a ladylike artist who tempts Choi.

Unfortunately, "Wild Romance" is set during a stopover, an interim between baseball seasons when there are no games being played.

More importantly, such overtly asexual female roles can be disadvantageous to an actress as such characters can leave too strong an impression with viewers. For example, many expressed dismay when Yoon started a new drama as a haughty heiress in "My Fair Lady" after "Coffee Prince;" they wanted another Go.

The 30-year-old actress must also use caution in her roles as she surely does not want to be pigeon-holed as an action actress. She recently finished playing a detector with superb martial art skills in "Poseidon", a KBS drama.

In real life, the actress became a boxing champion last March at the women's national amateur championships for rookies; she won in a referee stopped contest (RSC) victory in the 48-kilogram final against Sung So-mi in Andong, North Gyeongsang Province.

Lee first gained exposure through a reality show, "Just Married", as partner to former K-pop group, Shinhwa member Jun Jin. She then gained acclaim in her role in drama "Boys over Flowers" (2009).

"Lee Si-young to play tomboy who falls in love"
by HanCinema is licensed under a Creative Commons Attribution-Share Alike 3.0 Unported License.
Based on a work from this source