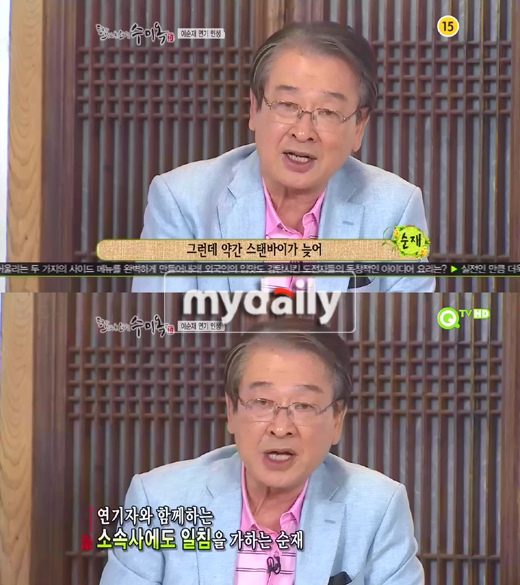 Actor Lee Soon-jae pointed out the way of some entertainment companies managing their artists the wrong way.

On the cable channel QTV "Soo Mi Ok", Lee Soon-jae mentioned Jang Keun-suk whom he acted together with in the MBC drama "Beethoven Virus".

"Jang Keun-suk is very talented. It seems like he's a hit in Japan too. But his standby is quite late" said Lee Soon-jae pointing out that he doesn't keep on time. At this event Kim Soo-mi said, "Your points go down when you're late, no matter how good you are".

Lee Soon-jae continued, "I think this is the problem of the managers and not Jang Keun-suk. Some think the later the star is the more authority it feels they have. The actor should be there on set in time for everyone to be comfortable and happy. I don't think it's Jang Keun-suk who is doing this but I think the people around him are making him late a little".

Kim Soo-mi also said, "I remember fixing the manners of a top star actor once in a movie". She also spoke about the time when she was the youngest among everyone and had to come to the set the earliest when she was filming the movie "Late Blossom" with Song Jae-ho, Yoon So-jung and Lee Soon-jae.

"Lee Soon-jae "Jang Keun-suk's managers' conscious is a problem""
by HanCinema is licensed under a Creative Commons Attribution-Share Alike 3.0 Unported License.
Based on a work from this source