Lee Tae-im, "You Will Love Me" first script reading 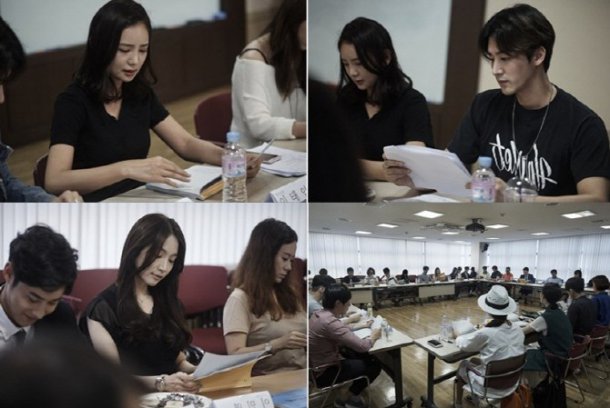 Actresses Lee Tae-im, Lee Min-young, actor Oh Chang-seok and others gathered for the script reading of "You Will Love Me".

Everyone said their hellos and started getting down to business. Everyone had come prepared and were serious about their roles and lines.

The concept of the three leading cast was "Black". Lee Tae-im appeared at the scene without make-up and wearing black. Oh Chang-seok wore a black T-shirt and Lee Min-young wore a black one-piece dress.

Producer Lee Jeong-pyo said, "I thought hard about making something special apart from other dramas. The concept is held in reality but the content is of something that is likely to happen in a fairy tale. I hope many people laugh while watching this drama".

Writer Yoon So-yeong shyly said hello and said, "I have worked on this for a long time and worked hard on it. I blended in the message of honesty between people".

"You Will Love Me" is about a woman pretending to be a man online, becoming the legendary romance specialist on SNS.

"Lee Tae-im, "You Will Love Me" first script reading"
by HanCinema is licensed under a Creative Commons Attribution-Share Alike 3.0 Unported License.
Based on a work from this source