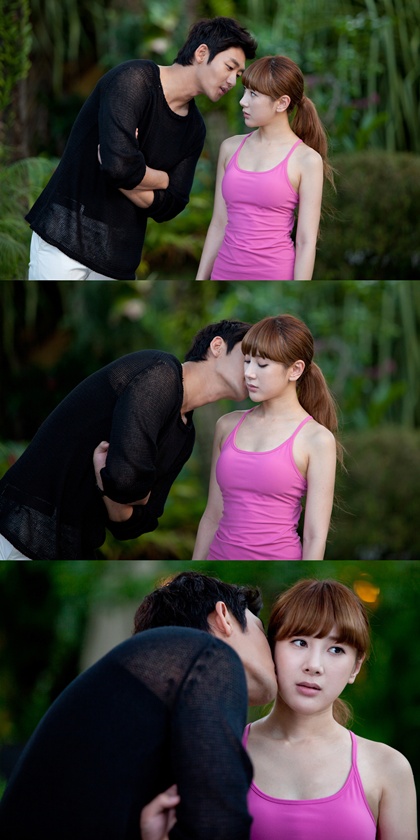 In a hotel in Guam on the 8th, a womanizer but skilled Dong-woo kissed and said goodbye to In-young (Seo In-young) who had been following him around and wanting to get married.

Lee Tae-sung managed to pull off the womanizer lawyer Byeon Dong-woo act very well and Seo In-young expressed determination and anger at Dong-woo who dumped her.

Being in a drama for the first time in 2 years after "Style" in 2009, Seo In-young is making 3 special appearances in "Hooray for Love" and will be acting In-young flaming with rage.

"Hooray for Love" is a comic drama in which a woman who was betrayed by her husband steps over things and overcomes reality. The cast includes, Lee Bo-young, Lee Tae-sung, Bae Jong-ok, Chun Ho-jin, Jin Yi-han, Byun Jung-soo, Kim Soo-mi, Yoon Hyun-sook and more. Coming in mid-July.

"Lee Tae-sung and Seo In-young, angry kiss scene"
by HanCinema is licensed under a Creative Commons Attribution-Share Alike 3.0 Unported License.
Based on a work from this source