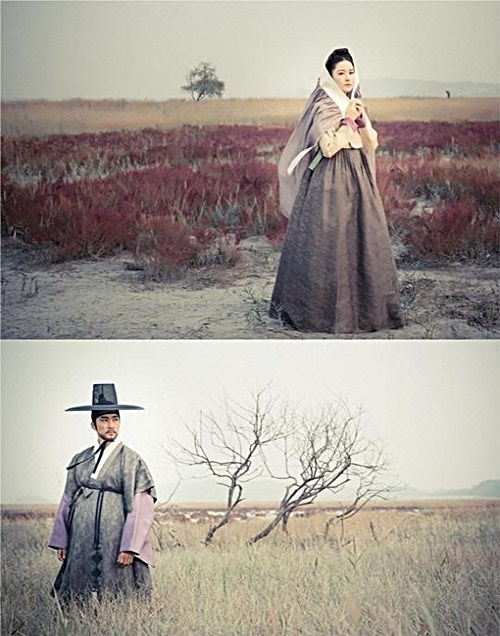 Stills of Lee Young-ae and Song Seung-heon were released on October 30, last month.

Song Seung-heon is the Joseon version of Gatsby, as he is an innocent lover who meets Saimdang when they were young and only has eyes for her forever. He is a carefree character who is covered from head to toe with an artistic touch. He doesn't negotiate with injustice and won't hesitate to speak out to authority.

In the pictures, Lee Young-ae and Song Seung-heon resemble an Oriental painting. They are both looking somewhere far with affection in the eyes.

These pictures were taken in Hwaseong on the 19th. Lee Young-ae is wearing an elegant Hanbok with a shawl over her head.

Song Seung-heon is Lee Kyeom from head to toe. His charcoal and violet oufit makes him look handsome and in the eyes that look at Saimdang he looks resolute and dim.

The synergy between the two is highly anticipated and the production crew promises this will be a worthy drama.

Meanwhile, "Saimdang: Light's Diary" will be broadcast on SBS in 2016.

"Lee Young-ae and Song Seung-heon in upcoming SBS drama "Saimdang: Light's Diary""
by HanCinema is licensed under a Creative Commons Attribution-Share Alike 3.0 Unported License.
Based on a work from this source