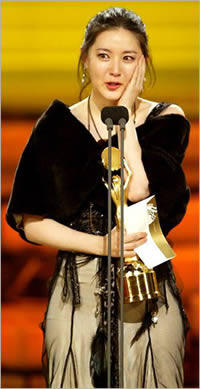 Actress Lee Young-ae lets her emotions flow during her acceptance speech after wining Best Actress at the 26th Blue Dragon Awards at KBS Hall in Yeouido, Seoul on Tuesday night.

Lee Young-ae's victory in Tuesday's 26th Blue Dragon Awards was every bit as dramatic as the TV shows and films that made her name. Lee is about as famous as a star can get in Korea, but though she has consistently received accolades for her work, she somehow never managed to take home any domestic award for her roles - to the point where her bad luck at awards became something of an axiom.

"Sympathy for Lady Vengeance" changed all that. In the movie, Lee shows astonishing range in portraying a character that demanded a total transformation from her normally quiet and demure self. Still, things were once again touch and go, since there are those who instinctively dislike bloody revenge stories and the film was up against crowd pleasers like "Welcome to Dongmakgol" and "You're My Sunshine" this year.

Missing out in her last two nominations for Best Actress for "JSA - Joint Security Area" (2000) and "One Fine Spring Day" (2001) made Lee's victory this year all the sweeter.

The actress' manager generated some extra tension in advance by quoting a rumor that Lee would once again be overlooked. So Lee prepared to accept the inevitable, and sat quietly through the ceremony with a calm determination to offer her heartfelt congratulations to whoever took the award home.

When at the moment of truth top star Choi Min-sik called out her name, Lee was no longer performing: she was so astonished she barely managed to get up from her seat.

Aided by Park Chan-wook, she did make it to the stage after all. "There were those who loved this movie and those that hated it, but even if it's just for this moment, I hope to be loved by everyone", she said in her acceptance speech, and added graciously, "'Sympathy for Lady Vengeance' was not made by just one, it is the fruit of the labor of the entire cast and crew".

Lee expressed her thanks to Park, the film crew, her manager, her stylist, and her parents. But she looked unable to control her emotions even after she finished her three-minute speech.