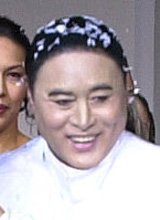 Some 126 articles of clothing belonging to late fashion designer Andre Kim will be put on exhibition at the National Folk Museum of Korea.

The museum said on Monday that 74 articles were donated in January by UNICEF Korea, to which the designer himself donated his creations for charity when he was alive. And last Friday, Andre Kim Design Atelier added 52 pieces from Kim's fashions shows and wedding collections.

"The clothes are precious materials that show the living history of Korean fashion. They will be shown in an exhibit open to the public from April 24", a museum spokesperson said.

"Legendary Designer Andre Kim's Outfits to Go on Display"
by HanCinema is licensed under a Creative Commons Attribution-Share Alike 3.0 Unported License.
Based on a work from this source