Hang on tightly to those skinny jeans, leather leggings and treadmill handles - it looks like slim silhouettes will remain in vogue this fall and winter. But rest assured, for puffy jackets in all forms and colors will help balance things out.

With the last cold snap persistently lingering about, Seoul Fashion Week's outlook for 2011 fall/winter trends seemed most appropriate - we might as well skip over the sunny season and fast-forward to the understated hues and warm jackets.

Korea's foremost fashion showcase opened in style on Monday with eclectic collections for men that offered something for everyone - rock-chic bikers, urban hipsters, vintage enthusiasts, no-joke businessmen or even geeks wanting to add a little edge to their everyday flannel shirts.

Kim Seoryong kicked off the Seoul Collection at SETEC, Daechi 2-dong, with classic suits in natural fabrics and colors. Mostly rich-textured wool and cotton in warm beige and brown, and point details of black and blue, his suits were so pret-a-porter that it had viewers wanting to have the catwalk lead straight into their closets. 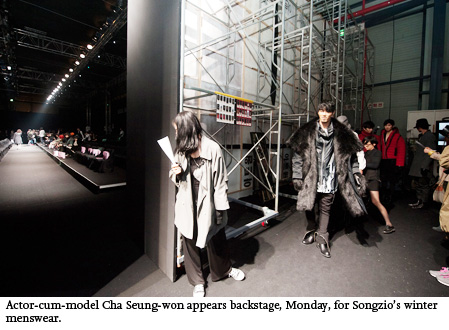 Song Zio's show was a favorite among press and fans with the appearance of top celebrities both on and off the runway - iconic model-cum-movie star Cha Seung-won bared his six-pack for chunky black fur-embellished coats, while pop star Kim Hyung-jun of SS501 and his brother, Ki Bum of U-Kiss, looked on as guests.

Tuesday provided a refreshing escape from conventional menswear, as designers such as Chang Kwang-hyo pushed the template of jackets, pants and coats with skirt-like shirts and big statement hats for Caruso. Lee Ju-young's Resurrection by Juyoung label provided an extravaganza of knit, leather and loud plaids, including coats dominated by gold zippers, punched wool and leather patchwork. Girls' Generation's Jessica spiced up the runway as a model, while fellow singers Brian and Gil watched from the first row.

Wednesday and Thursday saw the unveiling of the much-awaited women's wear by sought-after labels: Andy & Debb, which has been garnering a rave following in New York for their romantic minimalism, and Lie Sang-bong, who has been much loved for his incorporation of "hangeul" (Korean alphabet) designs into his exquisitely pleated creations. Park Choonmoo went all Goth for her line: leather leggings strapped heavily down to platform booties topped with marshmallow-puff down jackets. Lee Ji-sun, 2007 Miss Korea who studied design at Parsons, was spotted in the crowd along with actress Lee Tae-ran.

Meanwhile, Steve Jung and Yoni Pai, who have emerged as a creative duo to watch out for in London and beyond, stole the spotlight in the Fashion Take-off session for young designers. The packed show room was attended by supermodel Jang Young-joo and girl band 4Minute, along with everyone that matters in local fashion. Under the theme "Arrested Adolescence", Steve J & Yoni P gave women's black leather jackets and denim outerwear a playfully chic treatment with a crayon sketch motif of a teenage girl. 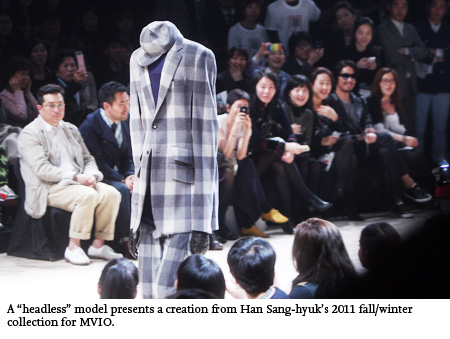 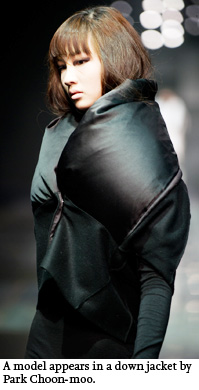 Fashion enthusiasts should also take a quick tour of the Seoul Fashion Fair, which showcases clothing and accessories by notable small- and medium-sized brands, such as Hayley Kiel's "come hither" collection of exotic eel skin clutches.
"Eel skin was long regarded as heavy material for wallets used by middle aged men, but it's a most versatile material. We created new textured styles in colorful palettes", Hayley Kiel, the creative director of her namesake brand, told The Korea Times. She has been participating in the fair for the fifth season and attracts growing interest from buyers from the Middle East and Europe. In particular, the woven-style shoulder bags suggest a cross between Sang A's exotic leather goods and Bottega Veneta's signature weave designs, but altogether charmingly new, and are currently available online (www.hayleykiel.com).
Meanwhile, though the number of Japanese buyers has dramatically decreased due to the recent earthquakes, a few teams have made visits to the fair. "We have always had regular demands from Tokyo, but we were surprised to have orders despite the disaster", Jung Da-woon, head of design at the shoe brand suecomma bonnie told The Korea Times. The brand, which is found in many local department stores, has already showcased its 2011 fall/winter collection in New York and Paris.

Style with a cause

Beginning 2:30 p.m. on Saturday, a fundraising bazaar for Japanese earthquake victims will take place at SETEC. Designers taking part in Seoul Fashion Week have donated clothing for the occasion.

Designers featured in the Generation Next section have teamed up with GROUPON, a world-leading social commerce organization, to produce "hope T-shirts", and donation boxes for quake victims can be easily found in fashion show and fair venues. All proceeds will go to Japanese victims.

"Lights, camera, fashion: Seoul forecasts slim silhouettes for fall/winter"
by HanCinema is licensed under a Creative Commons Attribution-Share Alike 3.0 Unported License.
Based on a work from this source