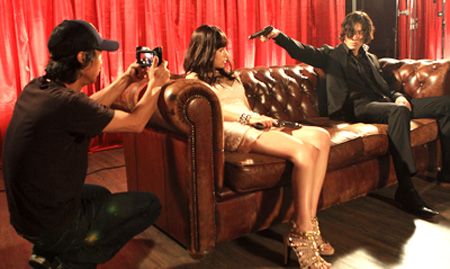 In 2008, director Spike Lee teamed up with Nokia to produce a film comprised of videos created using cellphones. "Within five years, new movies will be made with devices like these", he predicted.

He was right ― it took only two years in Korea. The iPhone 4 Film Festival next month will showcase a dozen shorts that some of the country's top directors created using Apple's latest smartphone.

"When I heard about iPhone 4's enhanced filming and video editing function, I thought it might be fun to invite directors to make movies", Kim Ho-sung, head of the festival and CEO of Realies Pictures, said Sunday in a studio in southern Seoul.

"It was a just an idea and I contacted several directors, and the response was extremely positive, and it was also well received by KT (the local carrier that exclusively sells iPhones in Korea). It's such a small project but the directors are contributing so much passion and energy".

The introduction of the iPhone in Korea, albeit belated, has generated nothing short of a paradigm shift. Local cellphone makers have scrambled to get in the competition by producing various touch-screen smartphones, and now it seems every other person is sending emails, typing up word processor files, updating their Twitter accounts and, of course, taking high-quality photographs and making videos on-the-go. Goodbye laptop computers and digital cameras.

The festival combines the mass appeal of user-generated content (UGC) with the star power of famous directors to provide unique content that is in sync with the times.

"The iPhone 4 is equipped with a higher quality camera, and enables users to film 720-progressive high-definition videos and then edit them to add music and special effects and apply other postproduction procedures using the iMovie App. The quality of the film may be good enough to screen in a theater", Kim Yun-jeong, a publicist for KT, told The Korea Times. Indeed, the films will be screened both on and offline next month.

For Kim Ho-sung, the festival is meaningful as a producer. "It fully utilizes the enhanced function of the iPhone 4 and gives way to diversity and versatility, because you can shoot anything, anywhere. Directors can showcase their creativity without worrying about production costs or mainstream appeal, and it will be a great opportunity for fans to view shorts by famous directors", he said.

Some directors have opted to use the mobile device from start to finish, while others have retained the traditional filmmaking process and simply replaced the conventional camera with the iPhone 4 camera.

Hong Kyung-pyo, the famed cinematographer of films such as "Mother - 2009" and "Taegukgi", is among the latter. During the film shoot revealed to the press on Sunday, he was seen walking around with an iPhone 4 ― with camera lens and grip accessories attached onto it. It was a curious sight, as many reporters were capturing the scene using their own mobile devices.

"I decided to participate because I lost my iPhone 3 and I thought I could get a free iPhone. We're working with two phones, in the event of getting a phone call while filming. Plus the battery runs out pretty quickly. But in all seriousness I thought it would be fun to film a cinematic video using a mobile device, with all the appropriate lighting", said Hong.

The iPhone has many disadvantages, the cineaste added, such as the lack of a zoom function. "But this is all about overcoming such obstacles to create something new. You can't compare this to conventional film or a TV drama".

The two lead actors of his five-minute movie, Kim Jae-wook ("Antique") and Kim Yoon-seo, said the filmmaking process wasn't much different with the iPhone. "But it's amazing that you can create such high quality videos and edit everything on the spot", said Kim, who was seen tampering with an Apple laptop in the studio.

"The films may be ideal for viewing on a computer screen, but are still good enough to project on the big screen. The iPhone as a movie camera has many disadvantages but can bring the audience closer to cinema", said Hong.

During the festival, from Oct. 6 to 31, the dozen shorts will be offered through its website, in theaters and of course on iPhones via an application. The films will be shown at the event's main theater, KT Olleh Square in Jongno, downtown Seoul, and at the Qook Zone in Haeundae during the Pusan (Busan) International Film Festival (PIFF) from Oct. 8 to 14.

Visit www.iPhone4filmfestival.co.kr to view the films and to learn more about the festival. 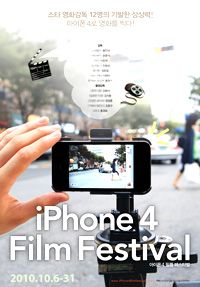 "Lights! iPhone! Action!"
by HanCinema is licensed under a Creative Commons Attribution-Share Alike 3.0 Unported License.
Based on a work from this source