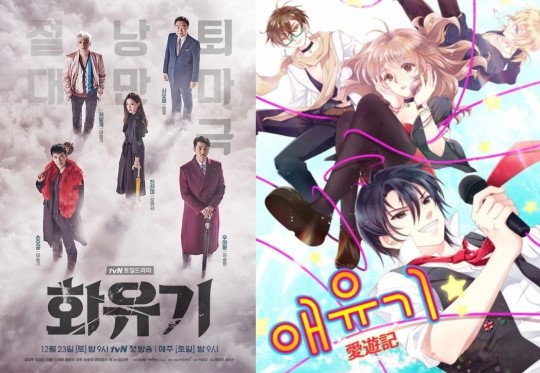 One of the most famous scriptwriter duos of the K-drama world, Hong Jeong-eun and Hong Mi-ran (aka the Hong Sisters), is under fire for heavy plagiarism accusation regarding their most recent drama, "A Korean Odyssey".

On March 6th, the author of a web-book, "Ae Yoo Gi", Dding-byeol, uploaded a detailed comparison chart on her blog detailing the similarities between her book and the drama "A Korean Odyssey", accusing the Hong Sisters of plagiarism. Her post says:

"I've been pondering on this for a while and thought that it wouldn't be helpful for the future cases if I just ignore it. I do not want to go to the court with this plagiarism accusation since it is hard to apply the plagiarism with Korea's copyright law unless they have certain percentage of lines or texts aligning. However, I wonder if one can just copy off the setting of someone's work with very detailed points. It may be easy to escape through the holes of the law, but this is not right when you consider the pride of the writer and moral of the industry".

"I'll leave the judgement to the viewers and readers. I hope you may reconsider the thin line between inspiration and plagiarism". 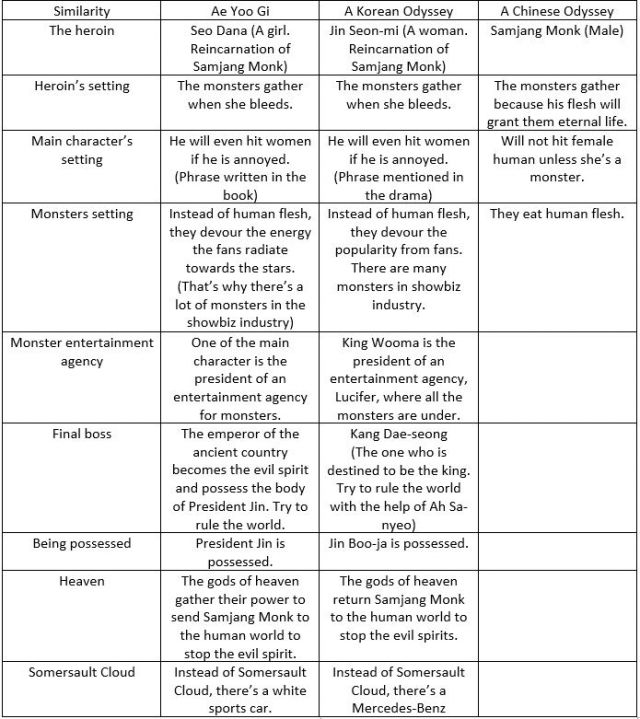 (Above : The chart made by the author of "Ae Yoo Gi" / Below : Translation)

The post became viral and spread quickly, resulting in many news articles and netizens pointing their fingers at the Hong Sisters. The Hong Sisters responded quickly to the accusation on the same day, posting a lengthy message, defending themselves point by point. This is their argument:

"This is Hong Jeong-eun and Hong Mi-ran, the co-authors of "A Korean Odyssey".

At first, we thought it would be worthless to respond to such accusation, but since there were news articles being published without confirming the truth of the matter and rumors continuously re-occurring on the plagiarism, we wanted to leave you this post for validation.

In 2010, there was a beautiful mystic creature, nine-tailed fox appear in the drama "My Girlfriend is a Gumiho". That was our first fantasy drama. In 2014, as we finished up an exorcism fantasy drama "Master's Sun", we wanted to make another exorcism fantasy drama where the monsters appear instead of the ghosts and have said so in an interview you can find. We wanted to make it based on the famous story 'A Chinese Odyssey (aka Journey to the West)', holding numerous brainstorming sessions and discussions with the directors and the production. We even had a serious conversation over turning 'A Chinese Odyssey' into a campus romance genre. Everyone at the discussion confirmed that they will be willing to provide their testimony.

The primary synopsis of "A Korean Odyssey" was first printed on March 20th, 2017. We heard that "Ae Yoo Gi" had its first chapter published online in 2015, so we would like to request if you can check anyone connected to us have been in contact with you.

Next, our arguments on the points you've made on plagiarism.

1. The heroin is Samjang Monk

There are about few hundred different remakes of the ancient story 'A Chinese Odyssey'. We can attest that there are many which Samjang Monk appear as woman. So, it can't be categorized as a special setting unique to your work. Our childhood show, 'Galaxy Son Oh-gong', had Princess Aurora as Samjang's position and 'Dragon Ball' also has Bulma, who was the heroin and taking over the position of Samjang in the beginning of the show.

2. The characteristic of the main character

'He will even hit women if he is annoyed' – Son Oh-gong is originally a monster that kills whoever crosses him even if the other party is in the shape of women, elderly, or a baby. We took that side of him from the original story and made our main character.

In the last eleven dramas we've written, there were many male main characters who were born by us. The setting of harming anyone if they felt violated is a setting we've used many times on our characters. In "Master's Sun", Mr. Joo Joong-won even yanked the heroine's hair. This particular setting can't be considered the originality of the author of "Ae Yoo Gi".

In "A Korean Odyssey", monsters can devour human (I think you've gotten a wrong idea about that). The setting where certain monsters take popularity as their energy resource is just one of the method used by few monsters. Also, the story of a beautiful monster seducing human and devouring them is a story we've already used back in 2009 with "My Girlfriend is a Gumiho".

4. Entertainment agency is the main stage

Using the entertainment agencies as the main stage is very common in this industry, especially in our works. We've used this setting in our first drama "Sassy Girl, Chun-hyang" in 2005. We also have "You're Beautiful" where the president of the entertainment agency appears, boy group idols have romance with the heroin and ride sports cars. This drama was written in 2009.

This is definitely not a setting used uniquely in "Ae Yoo Gi".

Being possessed by the spirits have made many appearances in our drama "Master's Sun" already. We also know that before our drama, there have been countless movies and dramas using this setting. Plus, the setting of Ah Sa-nyeo is not that she has been simply possessed but the evil spirit has completely taken over her body.

Fortunately, our "A Korean Odyssey" have aired all the episodes already and we believe that everyone can read "Ae Yoo Gi" without any difficulty getting to the book. If you feel that we've plagiarized, please see it for yourself before judging without relying on one-sided opinions and groundless rumors.

For those of you who've accused us of plagiarism in the past with our other dramas, please reveal your work and let people see it for themselves. We haven't seen a single one of these alleged victims and their work. If you can, please post them on online or send it to our production.

The purpose behind posting this letter to the online community instead of having it published as a news article is because we don't want to be accused of doing a media powerplay.

We'd like to give our deepest gratitude to all that watched "A Korean Odyssey".

For the sake of our viewers who've spent their precious time into watching the show, we felt the need of explaining our side of the story. Thank you for reading such a long letter".

"[Lily's Take] "A Korean Odyssey" Defends Against Alleged Plagiarism"
by HanCinema is licensed under a Creative Commons Attribution-Share Alike 3.0 Unported License.
Based on a work from this source